The more I read, the angrier I got. Angry at the media, government, society, men, as well as women.

I was also mad at myself for not knowing so much of the information brought forth in this the book, for not having taken the time to be better educated. 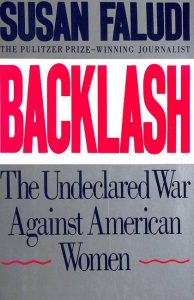 “Backlash: The Undeclared War Against American Women” (Crown Publishers, 1991) by Pulitzer-prize winning journalist Susn Faludi is not new. It’s nearly 30 years old. While I was alive during the time frame the author concentrates on – mostly the 1980s, some of the 1970s and when necessary decades much earlier – I didn’t realize what was happening. I was not thinking critically, it least not enough in high school and college.

This book made me think, made me reflect on the struggles women have had and continue to have. Equality in the workplace, at home, in politics, in society – we aren’t there. There continues to be a backlash.

What Faludi illustrates is how pervasive the backlash was just a few decades ago. Men wanted revenge for the advances women made during the 1970’s feminist movement. She delves into how the media covered women’s issues, but didn’t ask the same questions about men. The media skewed the coverage, taking stances in news stories, using statistics that were faulty and continually repeating untruths until they had been told so many times they were taken as fact.

Men, much like today, were writing laws affecting women without any contribution from women. Judges were moralizing from the bench.

Control and power. When women asserted themselves, there was backlash.

This backlash was ubiquitous – from the fashion industry, to television and film, to politics, even popular psychology.

There is so much to absorb that I could only read small segments at a time. Plus, it’s a really long book. In hardback it’s 460 pages, with nearly another 100 pages of notes that I didn’t read. I feel like I’m a smarter, more aware woman for having read it.