It’s not very often that a depressing book can hold my interest word, after word, after word. Such was the case with Eating to Extinction: The World’s Rarest Foods and Why We Need to Save Them (Farrar, Straus and Giroux, 2022).

This book by Dan Saladino was first published in Great Britain in 2021 by Jonathan Cape. 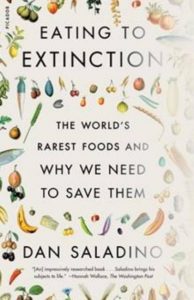 This was not easy reading or listening as the case was for me. To begin with, it’s long—464 pages. The subject matter is serious. Put the word “extinction” in a title of a non-fiction book and you know it is going to be important.

Saladino makes a convincing case for why we all—as in the entire world—need to care about the homogenization of our foods. Growing the same strands of wheat everywhere, raising the same pigs, limiting the varietal of grapes for wine—none of this is good.

It’s diversity in our foods—be it plant or animal—that is best. Partly, it’s about keeping the culture of an area alive by growing what is native to the land—not what is most commercially viable.

In the simplest terms, most of us know we should eat fruits and vegetables grown as close to our homes as possible. Doing this means we are eating what is truly in season. The problem in the U.S. and so many other places is we can find pretty much whatever we want year-round. We’ve changed the definition of growing seasons, we’ve changed expectations, and we have altered the flavor of foods in a bad way.

Corporations are providing our food, not traditional farmers. That in turn means the food tastes all the same. They have replaced native grains with something easier and more profitable to grow.

As Saladino points out, “The source of much of the world’s food―seeds―is mostly in the control of just four corporations. Ninety-five percent of milk consumed in the United States comes from a single breed of cow. Half of all the world’s cheese is made with bacteria or enzymes made by one company. And one in four beers drunk around the world is the product of one brewer.”

Saladino interviewed a ton of sources. After all, he is food journalist for the BBC. Some of the people he speaks with are fighting to keep their food cultures alive or to at least revive them. They are the heroes of the book.

The author takes us across the globe to learn about different foods, what is being done, what more needs to be done, and explains why we should care.

To me, this is one of those must-reads for everyone. It’s that important.