Book Review: Engaging read about the life of a fire lookout

I was pleasantly surprised about the depth of the book Fire Season: Field Notes from a Wilderness Lookout (HarperCollins, 2011).

And I’m thankful to whomever it was who recommended this book by Philip Connors. 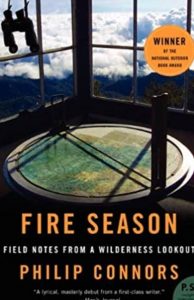 I believe anyone who loves nature will enjoy this book.

Beyond learning about life as an actual lookout, what makes Fire Season such a great read is that I got to know about a forest that was new to me—the Gila National Forest in New Mexico. It reinforced the history of the U.S. Forest Service’s protocols about fighting fires.

This lonely existence was captured so well by Connors. I could feel the confines of the 7 foot by 7 foot structure as well as his living quarters. But it was the vastness of the terrain outside his windows that in some ways made things feel even smaller.

Fire lookouts are a dying breed as technology replaces humans paid to scan the horizon for smoke. This would not be the job for adrenaline junkies. This would be a job for someone who is comfortable with themselves.

This was a fast, easy, enjoyable read.