Snow skiing. It’s what Dick Barrymore lived for. He is one of those rare individuals who was able to turn a passion into a profession.

Barrymore was a contemporary of Warren Miller’s in the ski film industry. In his book “Breaking Even” (Dick Barrymore, 1997) Barrymore takes readers on an entertaining journey from his childhood until he called it quits. His exploits are funny and scary, and most definitely from an era that won’t be repeated. 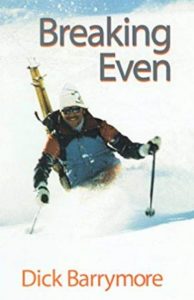 This book will give anyone who has seen a ski movie a greater appreciation for what it took to make these productions in the 1970s and 1980s. The equipment was bulkier and less sophisticated. The access to resorts easier. He chronicled the evolution of skiing during that time, including the introduction of free skiing.

“Breaking Even” succeeds because Barrymore doesn’t take himself too seriously. He is able to point out his shortcomings. It’s a quick read. It’s as much about the ski film industry as it is a travelogue as Barrymore takes readers to resorts all over the world.

While he doesn’t write much about his creation of Cabo Pulmo on the East Cape of Baja California Sur, it is mentioned. Barrymore died in 2008. His son, Cole, still lives in Cabo Pulmo.