In Stasiland: Stories from Behind the Berlin Wall (HarperCollins, 2002) author Anna Funder answers those questions to some extent. Mostly she delves into the lives of some of those who worked for the Stasi, the secret police in the former East Germany, as well as ordinary citizens. 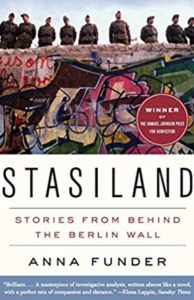 This book was captivating. It made me think.

My friend, Penny, told me about the book after she made a trip to Germany last year. My only trip to Germany was in 1990. Part of the Berlin Wall still existed, and I was able to chisel off a few pieces.

But that doesn’t mean my understanding of the two Germanys is great. This book actually made me want to learn more. After all, East Germany was not a country for long—from 1949 to 1990.

What Stasiland reveals are the struggles of the people, the corruption of not-so-secret police agency, and the beliefs of those who lived in East Germany when the wall was built and what happened to them when it came down.

It’s not a political book. It’s a history book by way of the subject matter, but it is not a deep, theoretical boring dive into this time period.

It’s a book about people. That’s what makes it so interesting. Real life people telling their stories, their experiences. Funder weaves them all together in a manner that makes sense and certainly kept my attention.