Tiny libraries bring books to neighborhoods throughout the world

If libraries are a gift, then the Little Free Library movement is like the icing on the cake.

It has been 10 years since Todd H. Bol started the concept by placing a tiny library outside his Wisconsin home as a tribute to his mom who had been a teacher. 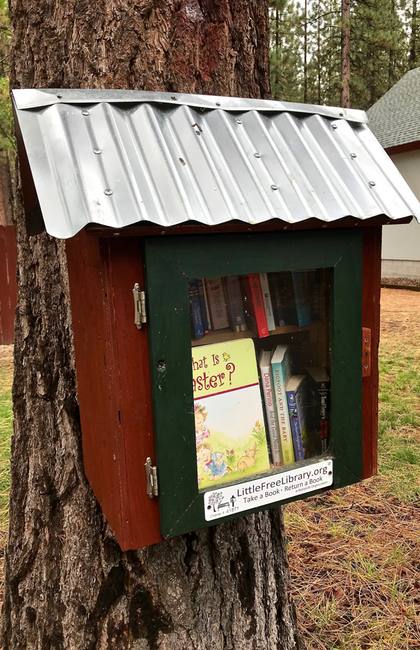 He wanted to share books with others. To make it easy, free, no need for a library card, no questions asked. People could take any book, or even more than one. The idea was others would leave a book, maybe return the book they had taken after they were done with it.

It was so successful in Bol’s neighborhood that he started to give them away to family and friends. The concept spread rapidly. Bol began to envision these tiny libraries being more than a regional phenomenon. He and friend Rick Brooks used philanthropist Andrew Carnegie, who built 2,509 libraries from 1883-1929, as an inspiration. They did even better.

Today, there are more than 90,000 little free libraries in every state and in 91 countries.

In 2012, Little Free Library became a nonprofit. People don’t have to belong to it to have a library. A useful tool on the website is that it has a map of libraries, making it easier to find one.

Each library seems to have its own personality, with some owners adding personal flare. Most are about the size of a fancy dollhouse. They are essentially a tiny house for books.

While I have never taken a book from one of these libraries, I have deposited books. Quite a while ago I stopped keeping every book I ever read. Having downsized my possessions in 2018, I own even fewer books. Being able to repurpose the ones I’m done with feels wonderful. Even the books I didn’t like, well, ideally they fall into the hands of someone who will like them.

On the website, Bol says, “I really believe in a Little Free Library on every block and a book in every hand. I believe people can fix their neighborhoods, fix their communities, develop systems of sharing, learn from each other, and see that they have a better place on this planet to live.”

One day I’d like to have a little library outside my home to share with my neighborhood – wherever that might be. For now, at Casa Luna where I live part time in Todos Santos, Baja California Sur, there are a couple shelves of books open to Airbnb guests. It’s fun to see what they take and what they leave.