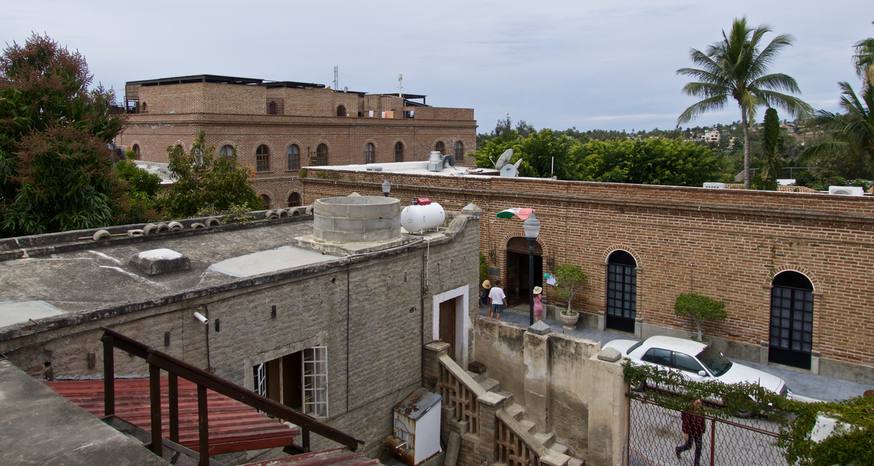 Hotel Guaycura on the far left, with the Todos Santos Inn to the right. (Image: Kathryn Reed)

If only the walls could talk. So much history is hidden inside the brick buildings of Todos Santos, Mexico. Fortunately, every other year many of these buildings are open to the public during the Historic Home Tour.

Wood isn’t often used in this tropical climate. Termites are one of the concerns. In several of the structures on the tour it was pointed out that beams were black palm. Docents spoke of how these palms are insect resistance, but are no longer used because they are endangered. For the wealthy, wood floors were a sign of status even though they weren’t practical in that climate. 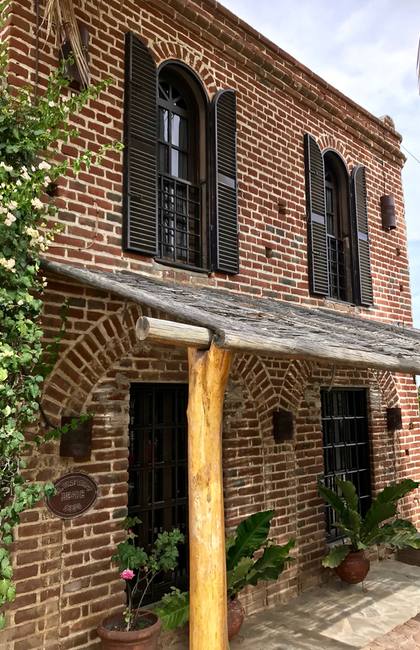 Interior photos of private homes are not allowed. In the back of this house is the wall used as the screen for the original movie theater. (Image: Kathryn Reed)

Todos Santos, which is an hour north of Cabo San Lucas on the Pacific Ocean side of Baja California Sur, has had an up and down history. By 1773, the mission was on its third religious order. According the literature handed out at this year’s tour, “In 1890, botanist T.S. Brandgee described Todos Santos as a pretty place of 30 to 40 houses overlooking fields of sugar cane. Its prosperity during the last half of the 19th century and the first half of the 20th was based on sugar production. The austerely handsome brick homes in the historic district and many of the public works were largely financed with sugar money.”

The sugar cane industry evaporated in the 1950s when the aquifer dried up. Still, that sugar cane history was part of the historic walking tour earlier this year. Today Todos Santos is a thriving town of about 6,000 residents, boasting a large ex-pat community full of artists, surfers and retirees. The culinary experience is outstanding.

The ticket to the 27 locations was a fundraiser for the Palapa Society, a nonprofit education enterprise. Participants could go at their own pace in any order they wanted. Volunteers at each site dispensed information, though the brochure that came with the ticket was extensive.

Some of the locations are possible to visit without being part of the biennial event, such as Centro Cultural, Hotel Casa Tota, Todos Santos Inn, Hotel Guaycura, Hotel California and Teatro Marquez De Leon. However, it was the private homes that were the most captivating. 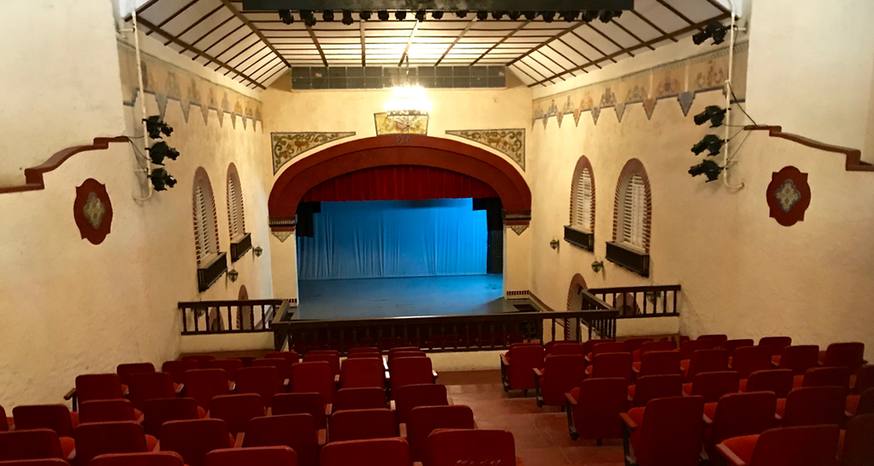 A 30-foot high cement wall at the back of one property used to be the screen for the old movie theater that operated there from 1935-44. Viewing would have been great from ground level or the second story. An indoor theater was built on the town plaza in 1944, which has since been restored and is used for films, lectures and other productions.

The old Todos Santos Inn used to be next door to the theater. For a time, it was the only place to stay in town. Originally, the two properties were owned by the same family when they were built in the late 1800s.

The current Todos Santos Inn had been a school. By the early 1900s the first cantina in Todos Santos opened where La Copa bar now exists, along with a store. During the Mexican revolution of 1910 someone threw dynamite at the building in protest of the owner’s ties to dictator Porfirio Diaz. The property fell into disrepair until it was bought in 1988 and later refurbished.

Ramon Wong, who became secretary of Defense for Mexico, has his name tied to several properties in town. People believe he came to the area at the height of the railroad building near the U.S. border. His descendants now live in La Paz. Wong was a soap maker when he lived in Todos Santos. The soap factory was located where Café Todos Santos is today.

Many of the homes in downtown Todos Santos are upstairs while stores are below; often with both being owned by the same person.

Not all of the buildings on the tour are open to visitors. Still, their stories are interesting. The next Historic Home Tour of Todos Santos will be in March 2022.