Long before the Eagles released their mega-hit and album “Hotel California” in 1976, there was a hotel in Todos Santos by the same name.

The hotel was the brainchild of a Chinese immigrant who opened it in February 1950 with 16 rooms. In 2001, it was renovated by new owners from Canada who turned the rooms into 11 suites. 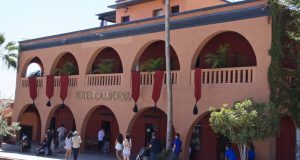 Hotel California in Todos Santos has nothing to do with the Eagles’ song. (Image: Kathryn Reed)

People like a gimmick, and the owners didn’t hesitate to tap into that mentality. The marketing campaign attempted to lure people to spend the night and buy merchandise, thinking the hotel and song were tied together.

Located on one of the main streets in town, it’s hard to drive by without seeing people having their picture taken with the hotel name in the background. While pictures at hotels is common, this scene isn’t being played out at the other lodging establishments in town.

Hotel California is listed on some cruise ship packages as a destination when they dock in Cabo San Lucas. They are bused up to Todos Santos, have lunch at the hotel’s restaurant and are let loose to walk around town before heading back south for the hour’s drive.

The Eagles in 2017 filed a trademark infringement lawsuit against the hotel owners alleging they were misleading the public by saying the song had something to do with the hotel in Baja California Sur.

Owners tried to register the hotel name with the U.S. Patent and Trademark Office. They withdrew the application and the lawsuit was settled in 2018.

The history page of the hotel once shared similarities between the song and the hotel – the dark desert highway, the mission bells. Today at the very bottom of that page it says the hotel and song have no connection.

Still, tell that to some tourists and they don’t believe you. They just want to check in and never leave.