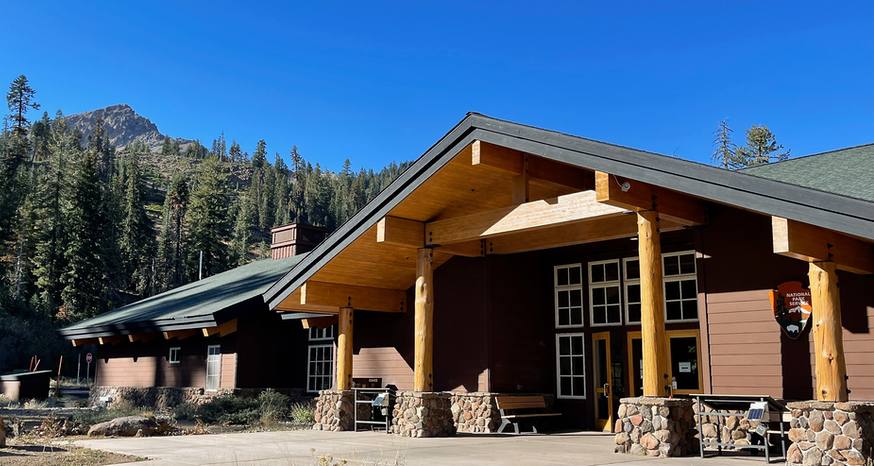 The Kohm Yah-mah-nee Visitor Center at Lassen Volcanic National Park is a destination unto itself. (Image: Kathryn Reed)

This park in Northern California is home to all four types of volcanoes that can be found throughout the world. Lassen Peak is a plug dome, Brokeoff is a composite, Prospect Peak is a shield, and Cinder Cone is, well, a cinder cone volcano.

While I’m an advocate for getting out in nature in all seasons, I’m also one who likes to learn a bit about what she is seeing.

Hiking friends had told me to take the time to peruse the visitor center. I finally found the time this fall on a drive with mom. It was definitely worth it.

A few times a day the visitor center shows an incredibly informative 20-minute movie called “The Story Behind the Landscape.” (The visitor center is closed Mondays and Tuesdays in the winter.)

Enjoying all that the Kohm Yah-mah-nee Visitor Center has to offer is time well spent. When the building opened in 2008 it was heralded as the park’s first year-round visitor center. It is located about one mile from the southwest entrance.

The name comes from what the Mountain Maidu call Lassen Peak, which means Snow Mountain.

While Lassen Peak hasn’t erupted since 1921, it could again.

The National Park Service website says, “The U.S. Geological Survey (USGS) maintains a National Volcanic Threat Assessment that considers the relative threats posed by U.S. volcanoes and identifies which volcanoes warrant the greatest risk-mitigation efforts by the USGS and its partners. The Lassen Volcanic Center (is) one of 18 volcanoes assessed as very high threat.”

Besides the film being educational, the visitor center has displays that captivate. Some are interactive—good for youngsters and the not so young. After all, the entire park is a geological wonder. Bumpass Hell “is the largest boiling springs area west of Yellowstone,” according to information at the center.

One sign talks about how the location of the park is where “four significant biological regions overlap—the Cascade Range, the Sierra Nevada, the California Central Valley and the Great Basin of Nevada.”

If you don’t have the time or desire to snowshoe or hike in Lassen, take the time to be enthralled by the visitor center.