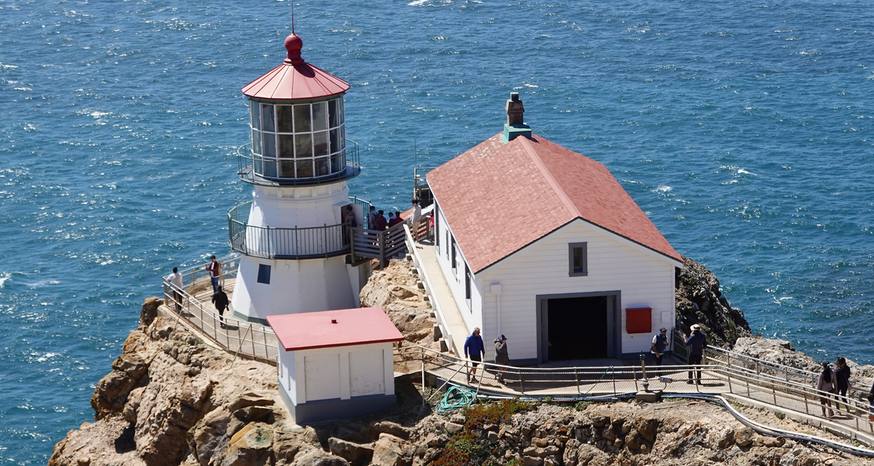 While California is known for its pristine beaches, plenty of boat captains can speak to the rugged, treacherous coastline.

Today the Point Reyes Lighthouse is a standing reminder of navigational tools erected in the 1800s to help steer ships clear of the rocky, foggy and potentially fatal land mass north of San Francisco in Marin County.

More than 70 marine wrecks have occurred at this stretch of coast, with 37 being total losses, according to the National Park Service.

The lighthouse, which began operating Dec. 1, 1870, is now owned by the National Park Service and is part of the larger Point Reyes National Seashore. It is a historic landmark. The lighthouse stopped operating in 1975. 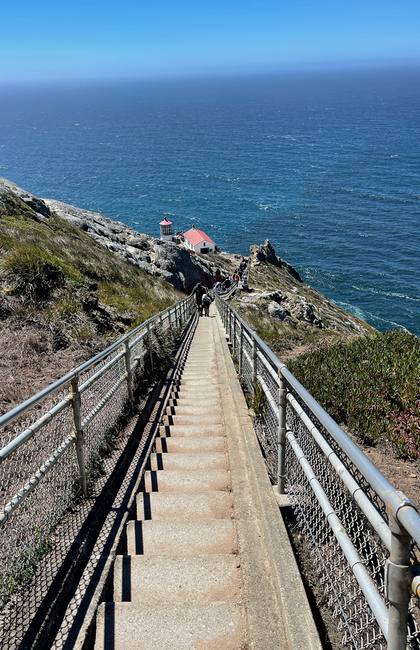 The lighthouse structure is at the bottom of more than 300 stairs. (Image: Kathryn Reed)

Today those navigating the waters of the Pacific Ocean rely on an automated beacon located on a structure below the original lighthouse. A horn bellows at regular intervals and light flashes to alert those at the helm of a boat of the land mass.

While the rest of the California was sweltering on Labor Day weekend, those at the lighthouse were bundled up. The wind was howling, though nothing like what it can be. Spring is the worst when winds can be hurricane force—exceeding 130 mph.

One thing that makes the Point Reyes Lighthouse special is the Fresnel lens is still intact. A handful of people at a time are allowed to enter the lighthouse where a docent gives a super short talk about the significance of the lens. It’s worth the wait.

“The 6,000-pound lens sits on a clockworks mechanism that rotates the lens using gears and counterweight. One complete rotation takes two minutes. As the lens rotates the beams sweep over the ocean like spokes on a wagon wheel, creating the signature Point Reyes Lighthouse pattern of one flash every five seconds,” according to the Park Service.

On a clear night it could be seen 24 miles away. 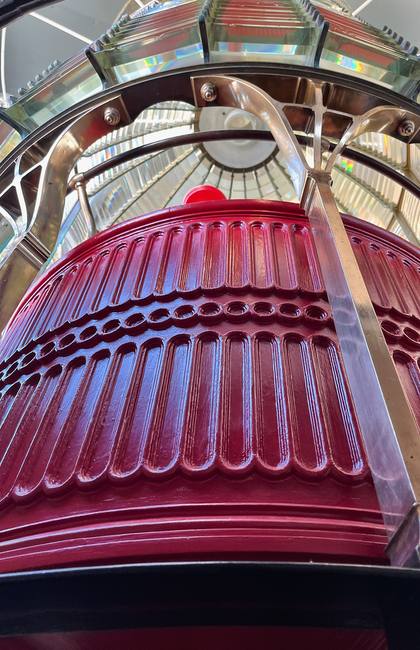 The Fresnel lens is still intact at the lighthouse. (Image: Kathryn Reed)

The Point Reyes Lighthouse has what is called a first-order lens. It is comprised of 1,032 pieces of hand-ground crystal.

This is the only lighthouse in the United States with its original first-order Fresnel lens, clockwork and tower that is still operational.

It was hard work to keep that light shining and the fog horn echoing.

“Once the (oil) lamp was lit, the keeper wound the clockwork every two hours and 20 minutes to rotate the lens and create the flash. Throughout the night, he kept the lamp wicks trimmed so that the light would burn efficiently,” the Park Service said.

On foggy nights it took 140 pounds of coal every hour to ensure the foghorn—which was really whistles and sirens—would blare.

To get to the lighthouse requires descending 313 steps. They are wider and shorter than normal stairs, so it makes it easier, but the width of them is narrow so it’s a tight squeeze when people are climbing up at the same time.

If you aren’t up to this, the viewing platform is 0.4 miles from the main parking area. However, those with handicap stickers can park closer. The viewing area is outstanding. The lighthouse and rugged coastline are spectacular from there. On super clear days the Farallon Islands can be seen.

The stairs are open Friday-Sunday, 10am-4pm. No cost to visit.

Most of the Florida homes in the path of Hurricane Ian lack flood insurance, posing a major challenge to rebuilding efforts, new data shows. Without the expensive coverage, homeowners are left to rely on either savings, loans or charity. https://nyti.ms/3Ci1Fug