A bit of Mexican history with each mouthful

Every bite just kept getting better. While I didn’t immediately know it, I soon learned I was eating a bit of Mexican history.

Chiles en nogada is no ordinary dish. This made it all the more special to have it for the first time with friends in Todos Santos on New Year’s Eve. We ordered our meal from El Refugio restaurant, which accommodated this vegetarian. Pork and chicken are normally incorporated into the mixture. 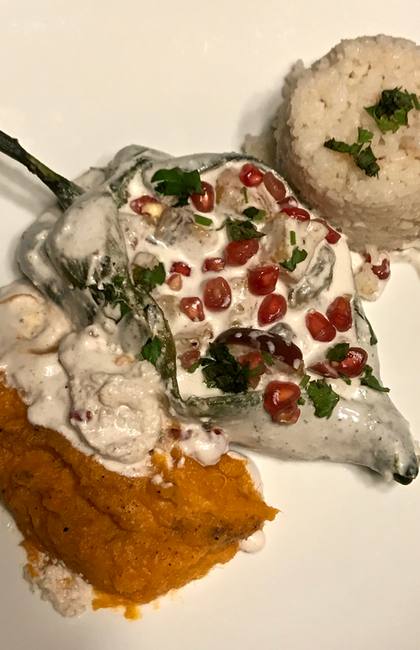 The dish is so beautiful it was hard to want to ruin the masterpiece with a fork and knife. The white walnut sauce with red pomegranate seeds and bits of fresh cilantro, along with the green of the poblano chile represented the white, red and green of the Mexican flag. It also looks Christmassy.

History says chiles en nogada, which essentially means chiles in walnut sauce, were the creation of the Augustinian nuns of the Santa Monica convent in Puebla in August 1821.

Knowing army Gen. Agustín de Iturbide would be in town after just signing the Treaty of Córdoba, the nuns knew something extraordinary needed to be part of the meal. That treaty established Mexico’s independence from Spain. Iturbide then became emperor of Mexico from 1822-23.

Often chiles en nogada is on menus throughout Mexico in August and September when pomegranates and walnuts are in season. This time period also commemorates when the dish was created as well as Mexican Independence Day on Sept. 16.

It’s served at room temperature. The New Year’s Eve plate also came with a serving of white rice and mashed sweet potatoes. It was a wonderful balance of sweet and savory.