Drinking beer to help the people of Ukraine

Alcohol is often the drug of choice to numb oneself to the realities of life and war. But what if buying a beer or two could do something more, something good for others?

Breweries throughout the world are being asked to brew RESIST—a Ukrainian anti-imperial stout. So far only two breweries in California are doing so, with one being Secret Trail Brewing in Chico.

Cans at Secret Trail’s RESIST are being sold for $15 each. Remember, this is a fundraiser. The beer is good, really good. The money is going toward the Red Cross humanitarian relief effort. 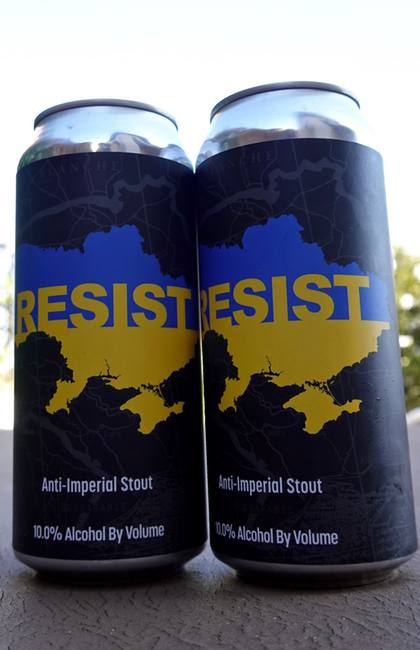 The recipe is online as are other ways to help people in Ukraine who are trying to survive while their country is being shelled and destroyed by the Russian military for reasons only dictator Putin knows. The recipe was created by brewers in Ukraine.

The Drinkers for Ukraine website says, “We’re not being prescriptive when it comes to the beer’s packaging and label design, all we’re asking is that brewers use the name, and Ukraine’s national colours. For the rest, use your creativity.”

Secret Trail’s can has a map of Ukraine in blue and yellow, with RESIST in yellow.

The Chico label says, “We brewed this Imperial Stout for the people and the brewers in Ukraine. Brewers in Ukraine have seen their livelihoods wiped out, and in some instances their businesses destroyed by Russian strikes. It is a collaborative effort amongst breweries worldwide to show our support for the brewers, and all the people of Ukraine, and large portion of the proceeds will go to the Red Cross Humanitarian Relief Fund. As you enjoy this rich wonderful beer, know that you are doing good for those in need.”