Super yellow butter. I didn’t know what to make of it. It was so bright I was sure some food coloring must have been added.

Come to find out this bright yellow butter that is the norm in Mexico is what it looks like when cows eat a natural diet. Natural meaning grass and flowers. It is the beta-carotene, with its yellow pigment, that gives butter it’s yellow color. Less beta-carotene, the more opaque the butter.

Not all animals operate the way cows do. That is why butter from sheep and goats is white; they don’t store the beta-carotene the same as cows. 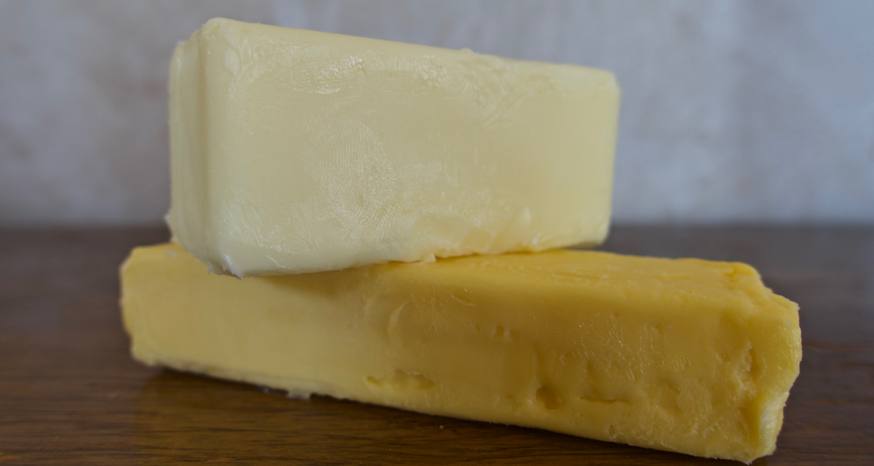 Mexican butter, bottom, is more yellow than what comes from the United States. (Image: Kathryn Reed)

Still, no matter where the cows are grazing, it’s hard to have them grazing year-round on grass. Because the consumer wants consistency with their purchases and not having fluctuating butter color during the year, as would be natural, those making the butter often freeze it during peak season in order to have it for sale year round.

In the United States the freezing part isn’t usually an issue because so few dairy cows ever eat a green meal. Those cows usually get a mixture of barley, corn and alfalfa in a feed lot instead of a pasture. The diet is consistent, thus producing consistently light colored butter.

Besides looking different, the butter in Mexico also tastes different. Richer would be one word to describe the difference. It also tastes a bit like the butter you get on popcorn at a movie theater, and even has that smell.

It’s like a lot of foods, they are similar, but not the same in every country. (Even Diet Coke – Coca-Cola Light here – is different; it’s sweeter in Mexico.) It’s a matter of getting used to things and being open to adapting to the world you are in and not holding on so tight to the world you came from. 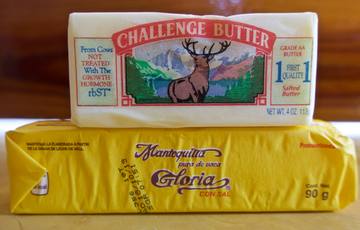 Consumers in Mexico have a choice of what color/flavor of butter to buy. (Image: Kathryn Reed)

While what the cows are being fed clearly makes a difference, mantequilla (butter) is not used as much in Mexican cooking as it is in the United States, other than in baked goods. Oil and cream are more popular.

If one doesn’t want to adapt, it’s possible to get U.S. butter in Baja California Sur. At Supermercado Del Sol II in Todos Santos one cube of Challenge butter (113 grams) was 40.75 pesos (more than $2). This compares to a local brand – Gloria – and its bright yellowness being 20 pesos (about $1) for 90 grams.