Mexican spice Tajin a citrusy delight for array of foods

In Mexico, limes became one of my go-to ways to season various dishes. That tanginess is different than a lemon. Plus, those tiny limes, not the ones sold in most U.S. supermarkets, come with more flavor.

With my predilection to use limes, it’s not surprising that one of my favorite spices is Tajin. 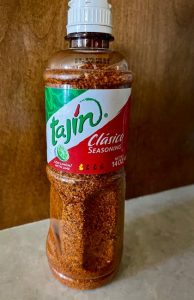 Tajin is a simple combination of mild chili peppers, lime, and sea salt. It has been produced in Zapopan, a city near Guadalajara on the mainland of Mexico, since December 1985.

The company says its goal is to use the best chilies possible; which grow in the region.

In 1993, Tajin was first exported to the United States. Today the original Tajin recipe is so popular that bottles can often be found in Costco—at least in Cabo San Lucas, Northern California and Northern Nevada. It’s also available in more than 30 countries.

I was first introduced to it three summers ago during the Spanish immersion program at Lake Tahoe Community College. One of the sections was on food. The instructor swore by Tajin.

What I haven’t tried it on is fruits—like watermelon and mango. This is probably because I often think fruit is good enough without any enhancements.

While I have only used the classic recipe, Tajin has other products. The spice comes in a low sodium version, there is a mild hot sauce, fruity chamoy hot sauce, habanero seasoning, and a seasoning rimmer for cocktails and other drinks.

I think it would be perfect to rim a bloody Mary or margarita.

“This is not a candy” is printed on the label. Why? According to Tajin’s website, “Kids have been known to eat it straight from the bottle, as if it were candy. We want to make sure the product is consumed as intended: to season fruits, veggies, and your favorite foods.”

It is good, but it’s hard to imagine eating it by the spoonful.

Amazing how 97 degrees feels like no big deal afte

Walking to breakfast with mom through the neighbor

The work … about a 22 mile bike ride through Son

Mom barbecuing for first time since we lived in Vi

Tonight’s moon from the back yard. Had a little