No straw? How the heck am I going to drink and drive?

My first encounter with a strawless lid on a cold drink was this past spring at Costco in Cabo San Lucas, Mexico. I’m pretty sure if anyone was watching me, I looked pretty funny as I searched for a straw in the outdoor food court. Then I paused. No one had a straw, but they had plenty of drinks. I finally looked at the soda. The lid had a little hump on it with an opening. It wasn’t an opening for a straw. I was supposed to drink out of it. 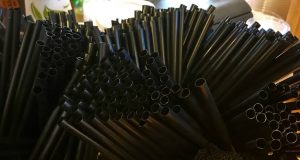 Straws have not been eliminated from The Beacon in Lake Tahoe even though California has a plastic straw ban. (Image: Kathryn Reed)

Awesome, I thought. It was like an adult sippy cup. I had never seen one on a cold drink; just for hot drinks.

I figured if Mexico had this, it must be all the rage in the United States. Then I remembered Baja California Sur is more evolved than parts of the United States. In July 2018, lawmakers for that state of Mexico passed a law banning single-use plastic, including straws. The legislation took effect this month.

I’ve visited more fast food restaurants this summer than usual while I’ve been out peddling my hiking book. Much to my disappointment I’ve only encountered straws; no lids to sip from. All of these straws have me seriously thinking about buying a reusable straw so I can say no to the plastic ones.

The Costco in Carson City, Nevada, also has straws. It’s unfortunate the company seems to be acting on external mandates to do what is right instead of changing to sipable lids at all of its locations.

I’m not sure I can wait for governing bodies to pass legislation banning them or for companies to figure it out on their own. I know I need to get better at saying “no straw” when I order a drink. Change is slow even though the evidence is irrefutable about how bad straws are for the environment and wildlife.

Despite California no longer allowing straws at sit down restaurants, that doesn’t appear to be true at bars that are part of the restaurant. I was so taken aback when I went into a popular South Shore restaurant to have one of their trademark rum drinks and saw containers of straws at the bar. That drink doesn’t require a straw, but all came with one – even for the people seated.

Does any drink really need a straw?