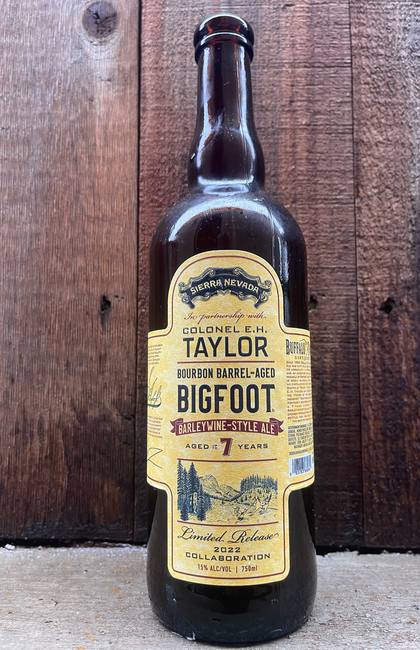 Sometimes the bottle is so fun you don’t want to open it. Sometimes it’s too big for one person. Eventually, though, it’s time to open that big boy to see what all the hoopla is about.

Such was the case with a special bottle of my sister gave me at the holidays.

A 750 ml, 15 percent ABV bottle of beer wasn’t something I wanted to experience on my own. So, I waited until a beer drinking friend was in town to open it.

What we had to share was a bottle of Sierra Nevada Bigfoot barleywine-style ale that had been aged for seven years in bourbon barrels in collaboration with Buffalo Trace.

The Chico brewery doesn’t even list this beer on its website. A Bigfoot is there. But not the one aged for seven years. I would be interested in trying it to see the difference.

A description about the beer on various websites other than Sierra Nevada says this, “Since 1983, Bigfoot Barleywine has captivated beer drinkers for its versatility—a force when fresh, and an adventure when aged. But the pinnacle of Bigfoot flavor? Hibernation in spirit barrels. And there are no distilleries more awarded than Buffalo Trace Distillery whose E.H. Taylor Jr. Collection honors the ‘Father of the Modern Bourbon Industry.’ Together we hand-selected Kentucky bourbon barrels to finish a seven-year vintage of Bigfoot Barleywine. If you’re lucky enough to hold this extremely limited bottle, may you enjoy it alongside the best of friends and family.”

PorchDrinking,com says this about the beer, “First released in 1983, Bigfoot was the second major modern American Barleywine to hit the market, after Anchor Brewing’s Old Foghorn, and it’s bold assertive Pacific Northwest hops and smooth full-bodied caramel-malt warmth have ensured that it remains an annual favorite among strong beer lovers. While there have been previous barrel-aged Bigfoot releases, including one of Sierra Nevada’s high-profile Trip To The Woods series, the Colonel E.H. Taylor is breaking ground at new levels of fancy, having been created through a refined blending process, much like a whiskey itself.”

It went down easy. While it was dark, it wasn’t heavy. It was a bit sweet, even chocolaty. It definitely had a unique, sweet taste. It was the perfect complement to hot tubbing after a day of hiking.

Would I buy it in the future? No, because there are better beers out there. But it was fun to try something unique. I don’t know how much my sister paid for this bottle, but I’m guessing it might have been one of the most expensive bottles I’ve had.