Cheap pharmaceuticals easy to obtain in Mexico without a script 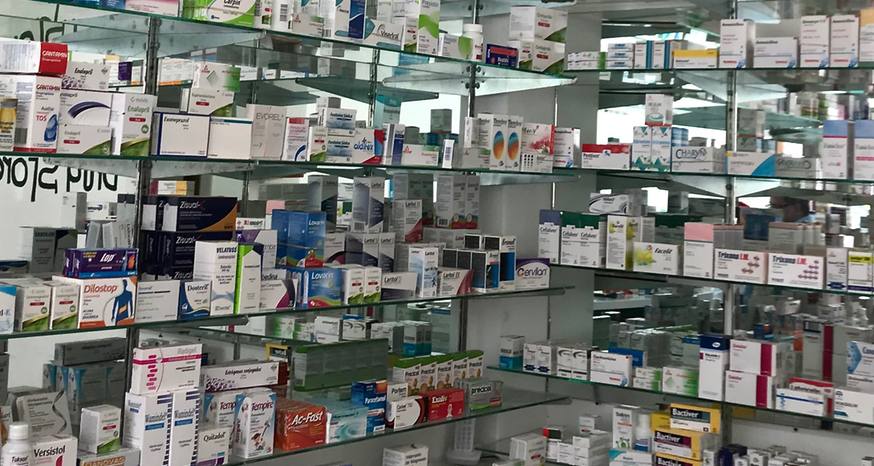 While drugs are behind a counter in Todos Santos, they don’t require a prescription. (Image: Kathryn Reed)

I’m not sure a well-stocked medicine cabinet (do people even call them that anymore?), is the same as an ounce of prevention. Nonetheless, I’m ready for almost anything.

Mexico and the United States are polar opposite in how they handle pharmaceutical drugs. I haven’t needed a prescription for anything I’ve bought in Mexico. While I had a script from the doctor after being bitten by a dog in May, that was really to tell the pharmacist what I needed – not permission to have the drug.

In fact, after consulting with my nurse practitioner sister, Pam, she told me to get a different antibiotic. Not a problem. The pharmacy sold me what I requested.

In the spring one of my sisters wanted prednisone. Again, not a problem other than needing to go to more than one pharmacy. A friend flew back to the U.S. with it. Customs didn’t care. The rules for bringing drugs into the U.S. include: keeping them in the original container, declaring them, only having an amount for personal use (so no selling the drugs), and a note from a doctor or actual prescription noting the drugs are being used under a medical professional’s care. Clearly, they didn’t ask for the latter. 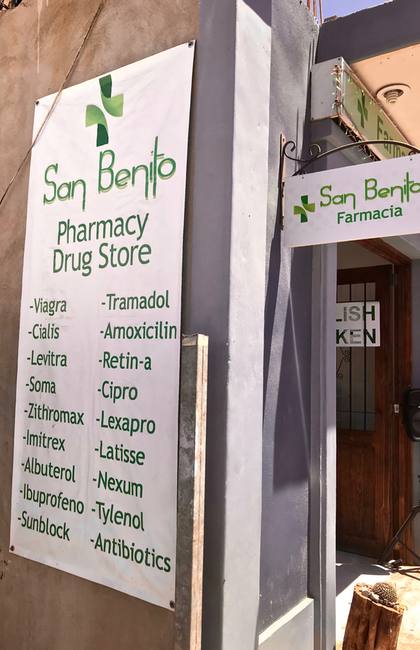 Many pharmacies in Mexico advertise outside what is available inside. (Image: Kathryn Reed)

It isn’t just what people in the U.S. would think of as prescription drugs that are for sale at Mexican pharmacies. They also have sunscreen, nail polish remover and other items that a U.S. pharmacy has on the shelves. Anti-itch cream for mosquito bites is probably what I’ll buy most often. My usual U.S. over-the-counter purchases were Advil and Excedrin migraine. I know I can get the former at Costco. I’m guessing I could get some sort of migraine med at a pharmacy in Todos Santos, or maybe one of the bigger grocery stores in Cabo. Fortunately, no headaches since last August.

I know of six pharmacies in Todos Santos. This is for a town with a population of 6,000. It’s obvious they are trying to lure tourists in with signs saying they speak English and outside walls listing what’s available. NPR reports, “The U.S. government estimate that close to 1 million people in California alone cross to Mexico annually for health care, including to buy prescription drugs. And between 150,000 and 320,000 Americans list health care as a reason for traveling abroad each year. Cost savings is the most commonly cited reason.”

Besides being able to purchase birth control, Viagra, antibiotics and other drugs without being under a doctor’s care, people are going to spend a lot less in Mexico. The Organization for Economic Cooperation and Development says individuals in the United States compared to people in all other countries spend the most per year on retail drugs – $1,200. According to Reuters, “U.S. prices for the world’s 20 top-selling medicines are, on average, three times higher than in Britain.”

This all made me start to wonder if perhaps I should load up on some drugs in Mexico, even though I don’t use many pharmaceuticals. I checked with Pam about which drugs would be good have on hand. She sent me a list: Zithromax-(Z-Pack), Keflex (cephalexin), prednisone, Diflucan, Macrobid, and Cipro. I showed the list to the pharmacist and he loaded me up. They were out of Macrobid. I also bought two tubes of pain relief cream similar to what my friend Sue had left. She had the prescription for an ankle injury. I kept it for my aching heals. I spent about $80 for everything. In some ways this seems like a ton of money for someone who doesn’t take many drugs. On the other hand, I know it was a fraction of what I would have paid in the U.S. under my last health plan. Now I just need to figure what to take when, or hope I never actually need what’s in the medicine cabinet.