Barefoot or socks, that’s been my usual preference for walking around the house. That was until there was only concrete beneath me.

I haven’t been in a house yet in Todos Santos that doesn’t have concrete floors. It’s just how they build them. People have area rugs, but they don’t cover everything. Plus, the outside is usually concrete, too – not wood or a synthetic that is common in the United States. 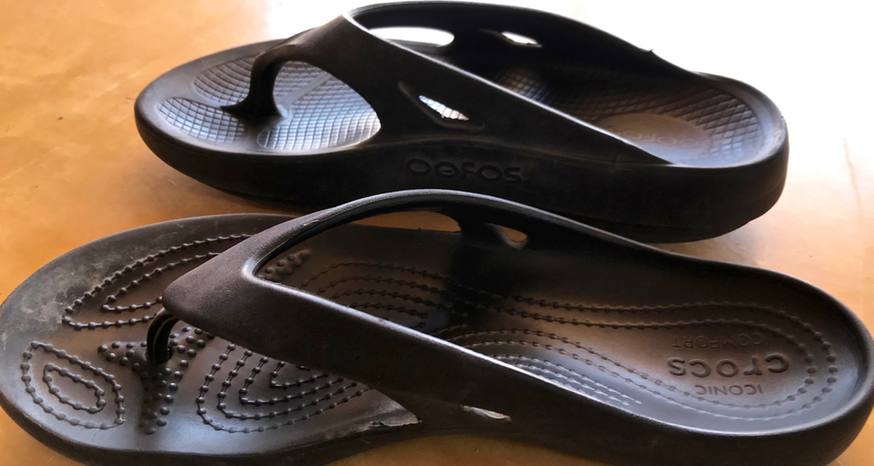 Thin flip flops, front, are OK for the beach and short walks; the thicker ones are like house slippers. (Image: Kathryn Reed)

My feet were screaming at me almost immediately. Naively I thought I would get used to the surface. I also knew better than to go barefoot, especially with a self-diagnosed case of plantar fasciitis. Neither heel was happy. Playing tennis exacerbated the pain. Massage, BioFreeze, ice, hot water – they all helped. Still, it was so bad at times that I couldn’t walk correctly – especially when I first got out of bed. The feet still need tending to, but it’s nothing like when I first moved to Todos Santos.

“The lack of shock absorbency in concrete flooring affects feet first, causing the soles and heels to ache. Feet take the brunt of the hard impact, as the muscles in the feet absorb the impact to protect the legs, back and rest of the body. Muscles can become sore, and over time, bones may even weaken as a result, leading to susceptibility to fracture,” according to Healthfully.com.

I was slow to admit I needed to have shoes on whenever I walked. I learned to keep flip flops by the bed as though they were slippers.

I moved to Todos Santos with thicker flip flops than I had ever had. I thought they were pretty cushy. It didn’t take long to realize they weren’t going to be enough. That’s when I asked my sister, Pam, about the ones she had that I had tried last summer. At the time I thought they were too thick. I ordered a pair of those Oofos and had Penny bring them last October. I’m rarely not in them. They are slipper, sandal, beachwear, eveningwear — at least in Baja.

Mexico is hardly alone in having hard surfaces to walk on. Slate isn’t going to be any more forgiving. Wood and linoleum are softer. Almost every place I lived in the United States had carpet. I didn’t know I was spoiled until I got to Mexico. Or maybe I’m just wimpy.