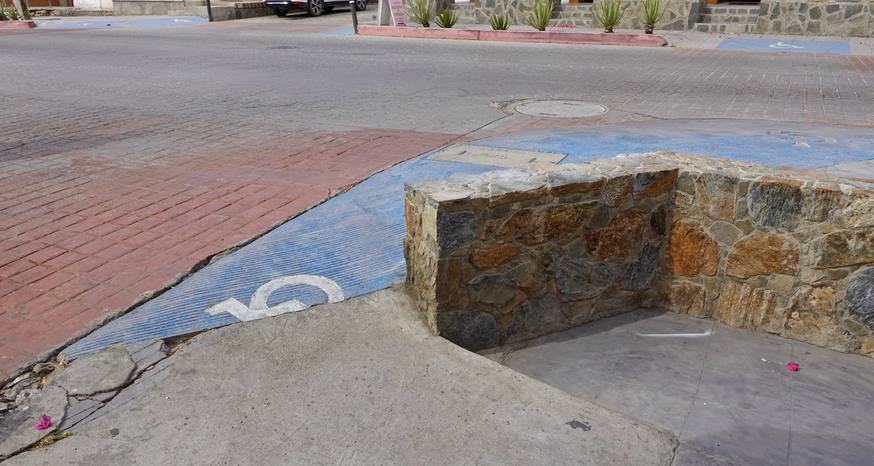 Sidewalk configurations in parts of Baja Sur can be confusing. (Image: Kathryn Reed)

Sidewalks, while they exist, are not built to a uniform scale. It’s a good idea to look down. Sometimes, though, it’s wise to look up because a power pole could be in the middle of the concrete.

It is common for poles to be in a sidewalk. (Image: Kathryn Reed)

Sidewalks in Mexico don’t have to conform to any particular standard. Uniformity does not exist because it is usually up to the contractor on the project to build what he wants. This is the opposite of the United States where the Federal Highway Administration regulates sidewalk construction. Some rules in the U.S. include, “(A)dequate width of travel lanes, a buffer from the travel lane, curbing, minimum width, gentle cross-slope [2 percent or less], a buffer to private properties, adequate sight distances around corners and at driveways, shy distances to walls and other structures, a clear path of travel free of street furniture, continuity, a well-maintained condition, ramps at corners, and flat areas across driveways.” 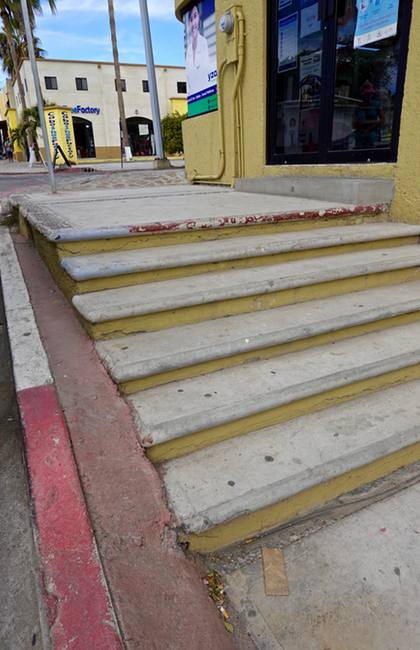 Stairs may suddenly appear on a sidewalk. (Image: Kathryn Reed)

Mexico could take a lesson from its northern neighbor. It’s so bad in some places in Baja Sur that walking in the street seems like a safer alternative. Though, based on statistics, Mexico streets are also not welcoming to walkers.

“Roughly 40 people die in traffic each day in Mexico, due to speeding cars, drunk driving, and a lack of traffic law enforcement. Its streets are the seventh deadliest in the world, according to the World Health Organization,” Bloomberg CityLabs reported in 2019. 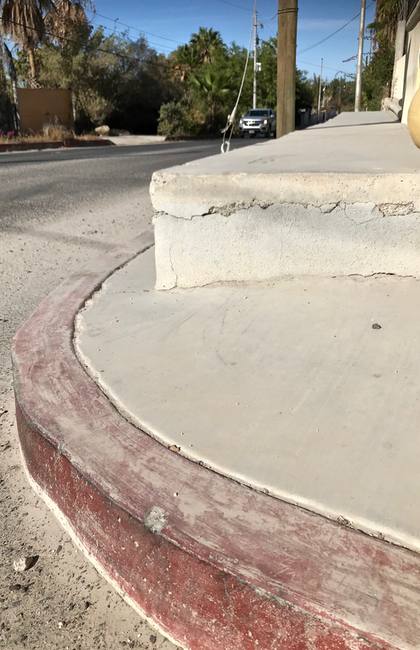 Danger can presents itself on sidewalks in Baja, like this abrupt drop off. (Image: Kathryn Reed)

With taxpayer dollars being limited, it’s understandable ripping up current sidewalks and replacing them with better ones is not going to happen. Still, it would behoove the Mexican powers that be to put standards in place for new construction or when repairs are being made to roads or the actual sidewalks.

It would be near impossible to use crutches, a walker or wheelchair in parts of Baja because the sidewalks are that difficult to navigate. For the able bodied, they are not something to run on. It might just end with a foot or more drop or be jarring because of the steep dips at the various ingress/egress points.

On a positive note, when in a town these sidewalks make one slow down while walking and take in all the surroundings, so that’s not a bad thing.