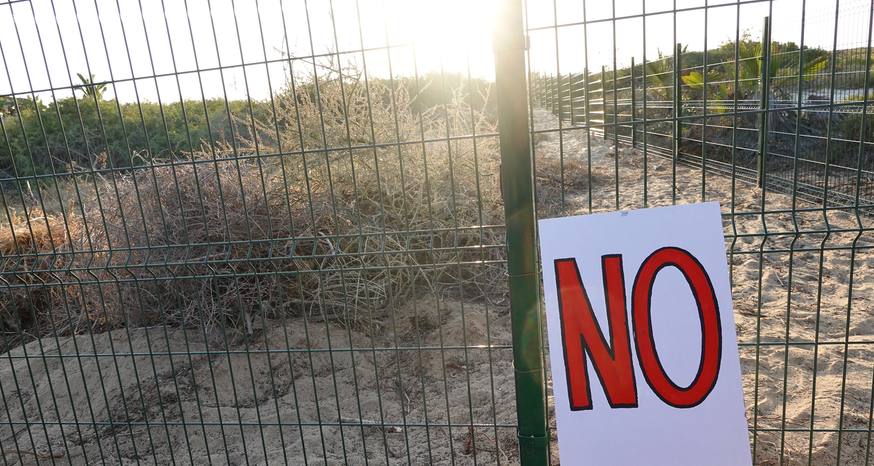 This sign sums of the desires of many Todos Santos residents when it comes to building on the dunes. (Image: Kathryn Reed)

Rules are for other people seems to be the mantra when it comes to building on the dunes in the greater Todos Santos area.

Another lot has a 5-foot green wire fence around the perimeter, with construction possibly starting this month.

In a show of solidarity against the continual building on these environmentally sensitive lands more than 100 people gathered Dec. 2 outside that fence. Some came with signs in Spanish calling for the revocation of the permit, the protection of the dunes, and how this type of building is illegal.

While the crowd was mostly white, not all were.

Protect Todos Santos initiated the gathering, with a spokesman explaining how Eddie Ogden owns 100 beachfront lots—all on the dunes. Ogden’s latest project, which would be his seventh house on the dunes, is likely to be a spec home that could break ground the first full week of December, according to the activists’ group.

Protect Todos Santos was formed earlier this year as a nonprofit for locals and foreign residents to safeguard the area “from the environmental threats our community faces due to the rapid growth we are now experiencing.” Their goals are more than protecting the dunes. They also want to help the environment as a whole, as well as to educate and not just be enforcers.

Those against building on the dunes are hoping construction does not begin and then get stopped like what happened a couple streets over on Calle Los Mangos. Authorities halted that illegal build, but did not mandate what was constructed be removed and the land restored. Beyond being an eyesore, it is an ecological travesty. 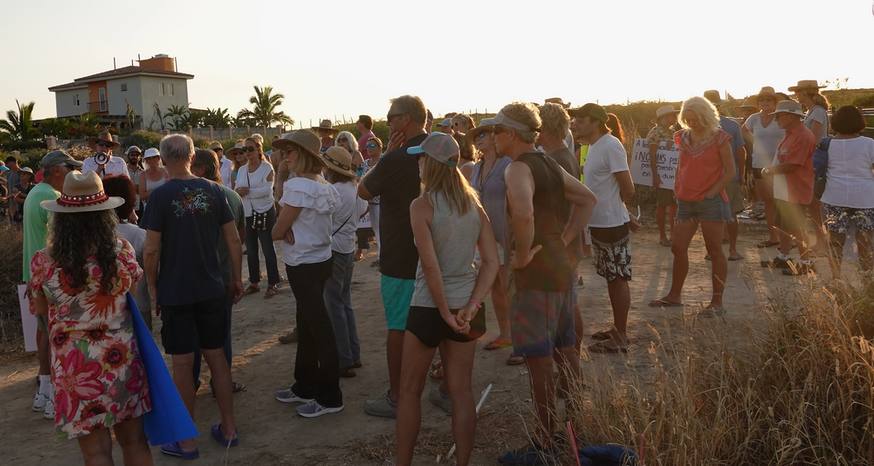 More than 100 people on Dec. 2 voice their concerns about building houses on the dunes in Todos Santos. (Image: Kathryn Reed)

Days before the protest Ogden, the landowner and developer of the controversial home build, was sent an email from the Gringo Gazette with a series of questions. He still has not responded. A couple of the questions were: You have a permit to build a 4,000 square foot house at Vista Ballena off International on the dunes near the turtle release. This violates the current PDU. How do you justify this? Are you backing the proposal to redo the PDU? Why or why not?

The Program for Urban Development (PDU) for Todos Santos, El Pescadero, and Las Playitas was published in 2012. It covers more than 30 miles from Elias Calles on the south to Agua Blanca north of Todos Santos. The PDU prohibits any development on primary and secondary dunes.

The problem is the authorities in La Paz are not enforcing the rules. Some allege bribery is an issue.

Another potential problem for those who are against this type of building is the real possibility of a new PDU being written. La Paz Municipal Planning Department representatives had a meeting Nov. 29 at the Cultural Center in Todos Santos to talk about drafting a new PDU.

“We are all wondering why they are drafting a new one when they are not enforcing the current one. I guess they just like having a bunch of meetings. Very frustrating,” Protect Todos Santos said in a group email.

Hours before the protest a leader in the group sent an email to supporters saying, “These protests are working. The one (Nov. 29) at the Cultural Center where 100 people showed up got us a meeting (Dec. 1) with 12 officials in La Paz, but they are not willing to pull the permit so we need to keep the pressure on. We are hoping a protest will get SERMANAT, who was at the meeting, to shut the construction down before the dune is destroyed.”

SERMANAT is short for the Ministry of the Environment and Natural Resources, which is equivalent to the Environmental Protection Agency in the United States.

Prior to the event, Protect Todos Santos rallied supporters with another email that said, “It is very frustrating that a permit is being issued without even the required ecological study and in complete violation of the PDU which does not allow any construction on the primary or even secondary dunes. So, our plan is to have our attorney John Moreno sue everyone involved in issuing the permit and to try to stop the construction by going out there and protesting.”

A Protect Todos Santos rep said attemps are being made to contact Romex and other building suppliers to not deliver to the Vista Ballena address. A few of the onlookers essentially said quietly, “Good luck; that won’t happen.”

Developers know that breaking ground leading up to and during the holidays is a key time of year to get away with less than honest undertakings because few officials work during this time so enforcement is even less likely to happen.

That is why at the protest people were encouraged to be diligent about reporting any activity in the area in order to stop any building before it occurs.

Note: This was originally written for the Gringo Gazette.