Amount of dog poop in Todos Santos is atrocious

Dog poop. It has no benefits to the land. So, why then, is it everywhere? 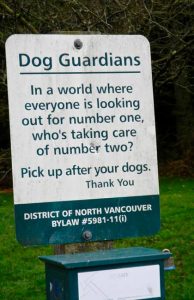 Signs should not be needed to remind people to do the right thing. (Image: Kathryn Reed)

There is more dog crap in Todos Santos than any town I have lived in. Yes, there are also more dogs roaming the streets than anyplace I have lived as well. Still, all that poop isn’t just from street dogs.

I am appalled at the way gringos treat dog poop. The most egregious shit incident happened Friday at tennis. A player was at the court with her dog, saw it poop on the path between the court and owner’s house, and just left it.

I regret I said nothing.

Is this some case of white privilege where you know the brown gardener is going to pick it up? I’m serious with that question. Was she merely thinking that the owner of the court has dogs, so what’s a little more crap? Maybe this dog owner lets her dog leave a specimen wherever he is, so this was normal behavior.

When I moved here last fall another newbie saw me picking up after AJ while out on a walk. He said I was making him feel guilty. I just looked at him in disbelief that he wasn’t picking up after his dog. I said something like – why would I change my behavior just because I’m in Mexico?

More recently a neighbor was out with his dog and saw I had a deposit from AJ that needed to go in the trash. He said I was putting him to shame, that he only cleans up after his dog when the poop is in front of a friend’s house. He goes back to the location instead of putting a bag in his pocket to be ready to pick up every poop. I didn’t verbalize what I was thinking.

I can’t stay silent any longer.

If doing the right thing isn’t enough, then consider this from DoodyCalls, a pet waste management business, “Dog waste is an environmental pollutant. In 1991, it was labeled a non-point source pollutant by the [U.S.] Environmental Protection Agency (EPA), placing it in the same category as herbicides and insecticides; oil, grease and toxic chemicals; and acid drainage from abandoned mines.”

This town has enough trash. Why are people knowingly adding more to it by not picking up after their dogs? It’s time to stop. Be a responsible pet owner. Care a little more about the place you call home.