If this is the end of the world as we know it, is that such a bad thing?

I was talking to someone about how long she thought it would be until things return to normal. I said I didn’t believe they would return to normal. I’m not sure I would want to if we could. Was the world so great before this strand of the Corona virus entered our lives? Were we too dependent on others? 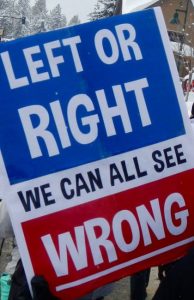 While so much of the world is in isolation, it is actually uniting us. Finally, (nearly) all of us have one focus. It is the Corona virus. Those being responsible are diligent about telling others where we have been and if we were really 6 feet from others. We are honest about underlying health issues and not wanting to be in contact with good friends or family. We are finding new ways to socialize – remote happy hours, watching the same movie at the same time to hear each other’s laughter. People are helping others personally and professionally however they can. I know new businesses will be created as a result of this. The Great Recession saw my massage business dry up, and my freelance work disappear. I launched an online news site in 2009 in the throes of the economic downturn. It might not have been a smart decision, but after year one it was a profit-making one. I have confidence there will be other entrepreneurs who will see this upheaval as a time for renewal. Already businesses are repurposing their plants to create things we need now like perfume manufactures making hand sanitizer.

Not to trivialize matters, but what if we considered all of this a reboot like you would with your computer or phone? Every now and then they need to be turned off, caches cleared, files purged and then restarted to be operating faster, cleaner and more efficiently. To take it to more of an extreme, consider this a hard drive crash. Can you repair the damaged drive or is it better to start with a brand new one? It’s a personal decision, but something we all should be thinking about. What do we want life to be like post-COVID-19? We have the power and obligation to be thinking about this. We need to take control and not let others keep controlling us.

But also consider this down time as an opportunity to personally recharge. In the era of being connected to work and others 24/7 through our electronic devices, getting news around the clock, it can’t be good for us. This should be a time for introspection so then you are in a better place to help your community.

Now we are feeling the effects of China being the supplier of so many products, even if it’s parts for an item. This is not to condemn China, but to call out the U.S. (and other) countries for going after cheaper labor instead of paying their own citizens a living wage to make the same product. Corporations for too long have been favored over people. The U.S. Supreme Court made that all too clear in 2010 with Citizens United. Shareholders (of which I am one of many individual stocks) have been the priority, not the general public. Remember, greed is one of the seven deadly sins, if you believe in that sort of thing. It’s the bottom line, not people at the bottom of the line that we care about. That mentality is changing for the good, and ideally permanently. Grocery store workers and gas station attendants are now deemed essential workers. Would you have ever thought they would be more important than you and your job title?

Perhaps this is also a good opportunity to rethink education. I don’t know what the outcome should be, but how about rethinking what is being taught and how it is taught? A friend posted how she allowed her kids to come up with questions and then they researched the answers. Children are naturally curious. Let’s encourage that creativity. Let’s not keep boring them in the classroom by preparing them to take another standardized test. I’m not criticizing teachers; I’m critical of the system. I hope through all of this teachers might be more respected as parents are dealing with their kids all day, every day.

It’s also time to rethink health care. Prior to the novel Corona virus most people had a strong opinion about socialized medicine. Now many of the naysayers believe tests for the virus should be free, the treatment should be free, and they should be compensated for missed work or losing their job. Why is it that we have to have things affect us directly, so personally, before we are willing to see the light and help others? I hope this pandemic helps us have g 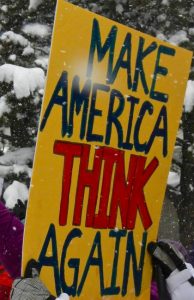 reater compassion and understanding for those who are more vulnerable – be it people who are older, have underlying health conditions, are living paycheck-to-paycheck, those who want to work but can’t for whatever reason, who were already caring for a child or parent and still trying to make ends meet, and all the others. Health care should be a right, especially in the United States where the wealth is so great.

We also need to be providing health care workers with the tools to do their jobs. It is mindboggling there is a shortage of essentials like masks. Everyone on the front lines – which includes people in the food supply network and so many others – needs the tools for their jobs, deserve our gratitude, and should be applauded for not quitting. Remember, they have a choice to work. They are showing up every day. That says something wonderful about them.

I hope we are stronger when we come out on the other side of this. I hope we re-evaluate our priorities as we are in the thick of it. I hope we figure out we have more in common than we previously were willing to admit. I hope we see this mass disruption in our lives as an opportunity for good. We’ve had other disruptions, but apparently not significant enough for us to change our trajectory. Sept. 11 and the Great Recession are two that happened this century. But they didn’t rattle everyone enough to make the change needed for a better world. I hope this crisis affects everyone. By no means do I want everyone to get the virus, or anyone else for that matter. What I hope for is that you take the time to see how the world as we knew it wasn’t so great. It was time for change.

I thank people for electing the current president of the United States. With the other option, we would have had the status quo – but still have been a country (and even world) that needed fixing. Donald Trump is the ultimate disrupter. He says things no other leader has said, does things no other leader has done – all bad, crappy, offensive, raw, in your face, inflammatory things. He has no grasp of science and refuses to surround himself with officials who are experts. A good leader surrounds herself with people who are smarter than her and lets them do their jobs. She is the conductor, so to speak, and the ultimate decision-maker and the one who has to take responsibility when things don’t work and gives credit to others when things do work. This president believes the opposite. I hope this virus allows others to see how the actions of this president are detrimental to all of us – not just people in the United States. I hope the chaos that he has brought to the office of the presidency, to the United States, and to the world is happening for a reason that will make us all stronger, smarter and living without blinders as we go forward.

If a better world order doesn’t come from all of this frenzy, we will have wasted a rare opportunity for significant change. Things aren’t going to be the same, so start reimagining how you want your world to be – as an individual, a family, a community, a state, a country and the world. As Mohandas Gandhi said, “Be the change you want to see in the world.”

Coronavirus testing sales by 'concierge' doctors under review by medical board https://www.latimes.com/california/story/2020-03-23/coronavirus-california-medical-board-tests-doctors

Beverage of choice when traveling through Baja to

Need ideas for things to do during these turbulent

I finally got to see my baby in person. Get your c

Another great day hiking in the Sierra de la Lagun

They are here ... “Snowshoeing Around Lake Tahoe

Another great day of hiking in the Sierra de la La

No filter ... this is today’s sunrise. #sunrise

Some days are tougher than others, but as they say

Great 5+ mile hike in Todos Santos with May and An

A salad so pretty I didn’t want to eat it. So bi

AJ, the princess, loves to be guard dog here in To

My Casa Luna, Todos Santos, Mexico, Airbnb is on I

It’s the gift giving season. A copy of “The Di

Mother Nature put on quite a show in Todos Santos

AJ in what seems to be her private fresh water lag