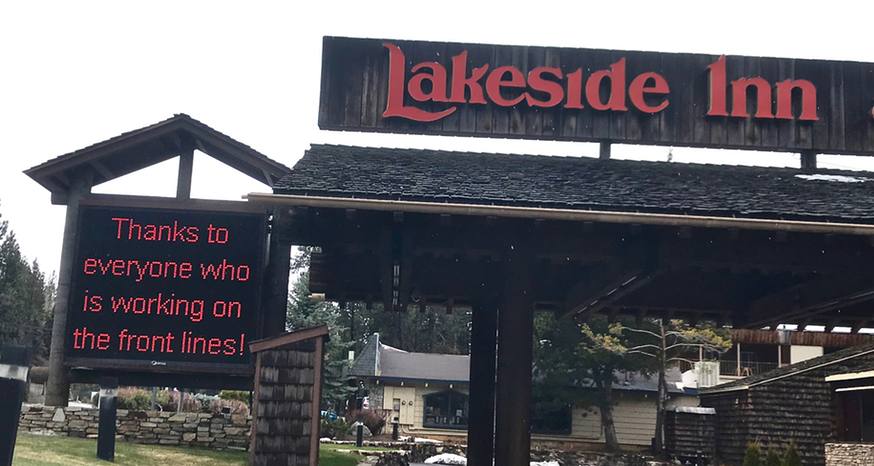 Lakeside Inn and Casino in Stateline won’t be reopening, even after this pandemic is history.

“After 35 years of being a source of entertainment for thousands of guests, we are permanently closing our doors. This includes all areas of our business including our casino, restaurant, and hotel. This decision was not made lightly. We hoped that we would be able to resume operations once this COVID-19 situation improved. However, that’s just not in the cards for us,” Lakeside said on its website April 14.

Lakeside, one of five casinos on the South Shore of Lake Tahoe, was always considered the locals’ gaming establishment. It had a more laid-back vibe. It was known for deals geared to the people who called the South Shore home. The lobster and prime rib combo was legendary. So were the breakfast deals at the Timbers restaurant.

I spent my 45th birthday at Lakeside. It was so relaxing – and perfect. A staycation. It wasn’t fancy, but it was a perfect Tahoe get-away. The staff was so friendly, the food delicious, the setting tranquil.

Nevada Gov. Steve Sisolak in mid-March said all gaming facilities must close. This included all aspects of those facilities – hotels, gambling, restaurants, other entertainment.

In recent years gaming properties have made more money off non-gambling aspects of their business. Northern Nevada casinos have been hit hard by Indian gaming in California. People no longer had to deal with chaining up in snowstorms or driving as far. Gaming is now available throughout California. While Lakeside had a couple restaurants as well as a 124-room hotel, the lodging component was outdated. This was a fact Lakeside officials admitted to in 2016. The plan then was to make the Kahle Drive-Highway 50 corner a focal point, with the hotel moving there.

Lakeside had tried to stay relevant. In the first half of 2008 the company spent more than $1.5 million to freshen up the place. The bulk of the money went into the kitchen and Latin Soul restaurant that opened that July.

In July 2018, Lake Tahoe News wrote, “Lakeside Inn has long been the favorite casino for locals. Now it wants to be the preferred employer. The hotel-casino a couple years ago had designs of re-creating itself so it would be a focal point when driving in from the east. Those plans have been shelved and instead the owners are focusing on the locals and not just the tourists. Yes, physical improvements are under way that are designed to modernize the property and appeal to the guests, but there is also a renewed emphasis on the employees.”

Now those workers will be looking elsewhere to work. And the community is left wondering if there will ever be another locals’ casino.

The last interview I remember doing at Lakeside was in December 2017. It was with a homeless man I had met downstairs in the entry. I invited him to eat at Timbers. While it really had little to do with Lakeside other than the man taking refuge there from of the cold woods where he slept, it was the perfect location for such an intimate conversation. The property’s powers that be didn’t know we were there. It was clear my “guest” was hard on his luck. It didn’t matter. Staff treated us with respect, without judgment.

More recently Lakeside’s gift shop sold my book “The Dirt Around Lake Tahoe: Must-Do Scenic Hikes.” It was one of the better local retail outlets when it came to book sales. I will always be grateful management said yes to carrying my book, especially considering this was my first book.

As a journalist, through the years I had ups and downs with Lakeside. Sometimes staff was accessible, sometimes not. There was more to it, but none of it is relevant now for so many reasons.

Lakeside has provided lasting memories – mostly good – for hundreds of thousands of people. That is a statement few businesses can make.