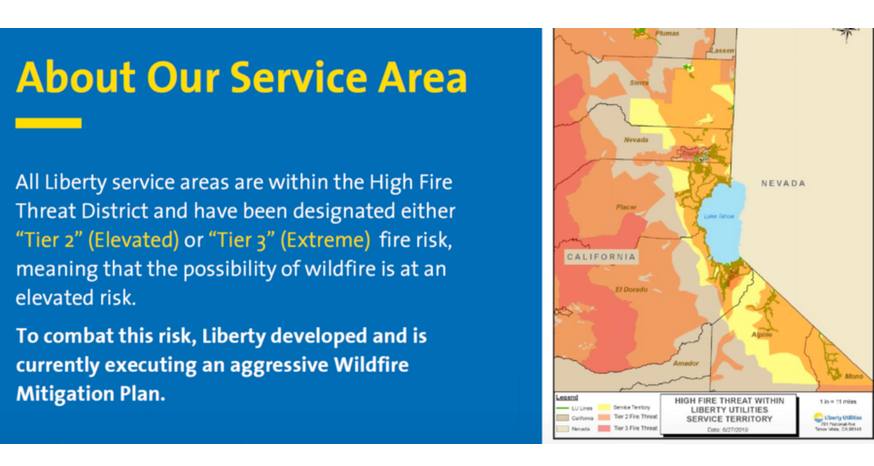 Liberty Utilities says it is doing what it can to not be responsible for starting a fire. This includes trimming trees around power lines, improving infrastructure, installing weather stations, and having plans in place for potential power shutoffs.

“At the end of the day it is incumbent upon Liberty Utilities to make sure our equipment does not start a fire,” Pat Dillon, fire protection specialist for the company, said. He along with others from the utility spoke June 25 during a webinar. Dillon is a retired battalion chief with North Tahoe Fire Protection District. He said a power shutoff is the last resort to protect customers.

While shutoffs are troubling for businesses and residents, they can prevent a catastrophe. The Nov. 8, 2018, Camp Fire in Paradise started because of faulty Pacific Gas & Electric Co. equipment. The Bay Area-based company had contemplated shutting off power that day but didn’t. The aftermath included more than 80 deaths, the town of about 27,000 people being wiped out by fire, with 14,000 residences reduced to ash. It will be years before this town is whole again. It will forever be changed.

On June 16, PG&E pleaded guilty to 84 counts of manslaughter stemming from the Camp Fire. The company will pay a $3.5 million fine for not having properly maintained a transmission line. Through bankruptcy court the company is expected to come out with a $13.5 billion plan to help the people of Paradise.

No community wants to go through the fires that have ravaged both ends of California in the last few years. Tahoe knows its own pain with fire even though the 2007 Angora Fire was not utility related.

Liberty on Jan. 1, 2011, took over NV Energy customers on the California side of the Lake Tahoe Basin, Truckee and Alpine County. Even so, the company took 20 years’ worth of data to determine how often in that time frame a power shutoff would have been like. Every five years was the answer. Liberty in fall 2018 turned off electricity in a small service area—Fallen Leaf Lake and Emerald Bay. High winds and dry conditions led to this action. In 2019 weather conditions came close to calling for a shutdown, but they subsided. Contributing factors for a shutdown include a forecast of sustained wind and gusts, low humidity, dry fuel conditions, and red flag warnings.

When possible people will be given 48 hours’ notice before the power goes out. The length of the outage is dependent on weather conditions and when workers can inspect the lines to ensure powering them up will not cause a fire. The problem when power is cut is that it takes more than flipping a switch to get it going again. That is why Liberty and all electric companies cannot promise when power will be restored. All lines impacted by the shut off have to be inspected, and some of those transmission lines are in remote locations, including in the forest.

Most of Liberty’s outages are unscheduled in the winter when snow takes out a line.

Liberty crews are in Meyers now working on vegetation management. In South Lake Tahoe all poles and other equipment are being inspected. Three of the 10 weather stations being installed this summer will be in the South Lake area. Areas in the tier 3 fire danger zone have annual inspections. (Part of South Lake Tahoe and Truckee are in tier 3.)

Over the course of the next few years Liberty will be installing covered conductors, testing and replacing aging poles, replacing conventional fuses with limiting fuses, and enhancing grid topology.