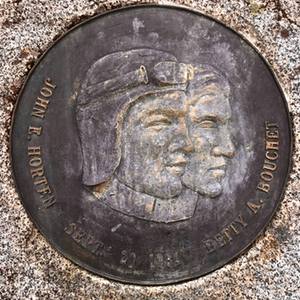 A plaque honors the two people aboard a plane that crashed in the forest of Lake Tahoe in 1934. (Image: Kathryn Reed)

Tucked away in a not so remote part of U.S. Forest Service property on the South Shore is a granite rock paying tribute to two part-time residents who died in a plane crash in 1934.

Likenesses of John E. Horten, 32, and Betty A. Bouchet, 23, are on the plaque. He distinctly has a leather pilot’s helmet and goggles that would be common in that era. Along with their names is the date of the crash—Sept. 20, 1934. Horten was piloting the Moth biplane when it crashed. They were both burned beyond recognition.

The memorial is in the Gardner Mountain area not far from Fallen Leaf Lake Road. Nothing is there to explain what happened, no signs point the way to find this remembrance. It’s roughly at the spot where the plane went down, according to a local historian. 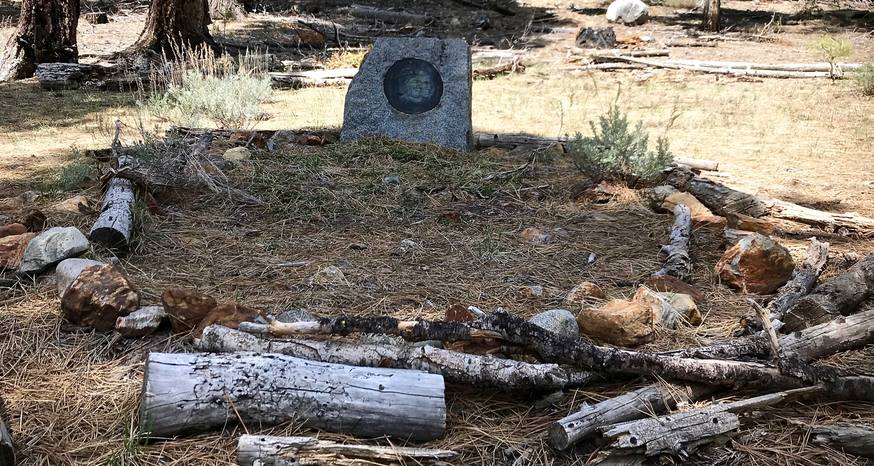 A plot of land on U.S. Forest Service property on the South Shore memorializes two people who died in a plane crash. (Image: Kathryn Reed)

At the time there were a number of dirt airstrips in the area. Some more primitive than others. Reports at the time said Horten first wanted to land at Johnson landing field, but then headed toward to the unfinished Dunlap field.

Witnesses told the Nevada State Journal newspaper the plane appeared to have engine trouble and nose-dived from 1,000 feet. United Press at the time said the plane was at 100 feet before dropping from the sky.

Ninety years ago people mostly lived in the Lake Tahoe Basin on a seasonal basis. Horten was from Burlingame and Bouchet from San Francisco. According to the Nevada State Journal, he was a butler for George Pope and she was a governess for the Hellmans. The Popes and Hellmans were wealthy families from the Bay Area whose legacies continue to this day. Think the Pope Estate on the South Shore and the Hellman-Ehrman mansion on the West Shore.