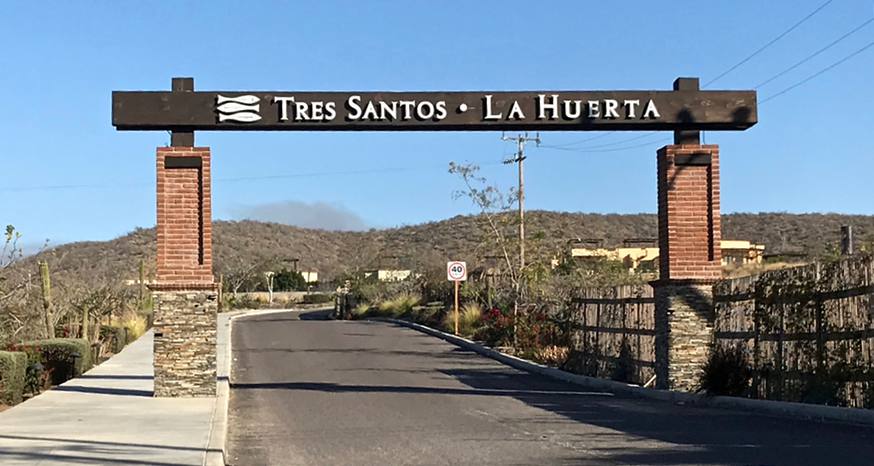 Anger, disbelief and sadness. Those were the three overwhelming emotions I was left with after watching “Patrimonio” on Sunday.

This is the documentary chronicling the recent plight of fishermen in Todos Santos who were losing their ancestral beach to big developers. These were developers who wanted to add nearly 5,000 homes to a town of only 6,000 people.

While the fishermen were the face of the struggle and lawsuits, the project had far-reaching ramifications. Developers said they wouldn’t tap into the water supply, but they did to the detriment of the town. Wetlands, that under Mexico law are supposed to be protected, were bulldozed. Bribes divided the fishermen. Families were ruined.

The film, whose title means heritage, debuted in 2018. It was part of the Todos Santos Film Festival that year. This year it was shown twice on April 7 as a fundraiser for the local theater.

Tres Santos, as the mega-development is called, was going to include a boutique hotel, 4,772 residences, a farm, desalinization plant, and campus-learning center tied to Colorado State University. The college campus, a few residences and farm-to-table restaurant were completed in town.

Hotel San Cristóbal is also open, catering to an affluent crowd that probably doesn’t care about the illegalities that were undertaken to erect the lodging establishment. That’s assuming they even know the history. (The Bunkhouse Group out of Austin, Texas, owns the hotel property.) 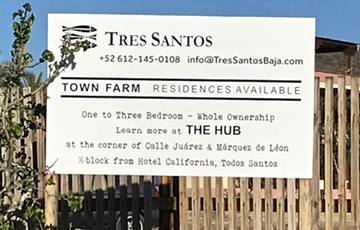 The sign at Tres Santos continues to promote the property. (Image: Kathryn Reed)

Colorado State University, which is in Fort Collins, has a website about its Todos Santos campus. It says, “We’re eager to enhance the exchange of students in Todos Santos and BCS with Colorado students, to engage the BCS community in life-long learning workshops and courses, and to work together to make a difference and build global connections.” However, I could not find anything about actual classes locals could take, or lectures open to the public, or any event that was for community members.

This is how the developer describes themselves: “MIRA Companies, founded by Denver-based Black Creek Group in 2007, is the trade name for the fully integrated real estate investment and development company that focuses on middle-and high-income residential and residential-related assets, including master-planned residential, second home and large-scale mixed-use urban infill communities in Mexico targeting Mexican, U.S. and Canadian nationals.”

A Dec. 9, 2015, letter to the community from Tres Santos reps that surprisingly is still on that entity’s website says, “The Tres Santos beach community will not infringe on the fishermen’s beach concession. We have committed to this in word and writing. Period.”

That proved to be one of many lies the company spewed. The developer tried to gut the fishing community. It has forever changed their way of life by reducing the land they have to work from. A wall built for the beachfront hotel causes the water to crash on the little fishing area, bringing sand and propeller damaging rocks. The lagoon emptying into the ocean won’t be the same.

It was a multi-year legal process before the fishermen prevailed; the court siding with them in early 2018 regarding their right to the concession at the beach. Besides winning the rights to their patrimonio, the fishermen and supporters (who were Mexicans and gringos) helped preserve Todos Santos.

Water is a real issue here. Developers said their water use would be self-contained. Lies. They are using the city water and no desalinization plant is operating.

It’s hard to believe anything the backers of Tres Santos have to say after all the lies they told, the documents they forged, the environmental analysis that was bought in their favor, and the people they bribed to greenlight the project.

The film shows how the government wheels were greased. Big money was tied up in the project.

Chip Conley had his hands in the Tres Santos mess. The film has footage of him in New York wooing would be investors. Conley was the founder of the Joie de Vivre boutique hotel chain. He later joined Airbnb to lead the Global Hospitality and Strategy division. While Tres Santos is not going any further at the moment, Conley still has a large presence in the region. He has a compound in Pescadero where he runs the Modern Elder Academy. Weekly sessions cost $5,000.

Even some who know about the strife and conflict turn a blind eye. I don’t get this. I have a niece who has spent money at the hotel because she said a friend wanted to go there. I have a tennis partner who goes there and to the restaurant in town at Tres Santos without any guilt.

To me there are times when standing on principle is a must. It is important to have morals, ethics and integrity. What if no one supported these businesses? It’s an answer I would like to see play out. Voting with one’s dollars, or pesos as the case is here, is now more important than marching in the street and other proactive measures that were undertaken during the height of the turmoil. I will not reward these barbarians with a single peso.

An oddity about the movie is that filming began before most people even knew there was a story to be told. It made me wonder how this could have happened if the “good guys” didn’t perhaps stoke some of the unrest. I’m not saying they were in cahoots with the developers, but there are several pieces of the story that are missing. How did attorney John Moreno get involved and why? His family has a long lineage in Todos Santos. How did he and his family benefit from siding with the fishermen?

Colorado State is practically nonexistent in the film. That is an oversight; or maybe it’s the sequel.

The buildings are built, the fishing lagoon ruined, but the lessons should not be forgotten. There could be another Tres Santos or an attempt to finish what was started. That is why knowing the history is important.