SLTPD defends its practices as others question them

An officer with a gun is intimidating—even when all you’ve done is your job. And you did it well and accurately. He didn’t like what I had to say about his wife who was on the South Lake Tahoe City Council at the time. He let me know in no uncertain terms I needed to back off. I didn’t. I kept writing the truth. That’s what journalists do. Other than as a kid being yelled at by my dad, this was the only time I’ve been scared when I got my ass chewed. Like with my father, I knew not to talk back and to just take the tongue lashing.

I kept notes about this El Dorado County sheriff’s lieutenant who was based in South Lake Tahoe for years. At the time I told a couple people about the incident in case something were to have happened to me that seemed suspicious.

Officers know they have the upper hand no matter what. A gun does that. So does a taser, a club, cuffs and the power to arrest. To say law abiding citizens have nothing to fear is naïve and ignorant.

I can’t imagine what it is like for people who are targeted by law enforcement officers because of their skin color. That is a privilege I have being white. I don’t look suspicious in the eyes of a racist person. To them, I am one of them. They are so very wrong. I’m not. I may look like their racist selves, but I don’t think like them. I don’t think every cop is racist. But the ones who are prejudice against anyone—be it skin color, ethnicity, gender, sexual preference, religion or some other reason—are the ones who need to be cast aside, maybe jailed, certainly fired, and made an example out of as who should not carry a badge and weapons.

I don’t want to praise the ones who aren’t prejudice, who don’t racially profile, who don’t use excessive force, who do their job admirably. That’s just doing your job. Remember, you volunteered for this job. Being a police officer also does not make you a hero. There may be times you are put in a position to do something heroic, but clocking in every day isn’t it.

Racism is alive and well on the South Shore. This story in the June 23 Tahoe Daily Tribune about a black doll found hanging from a power line is evidence. People can say blue lives matter until they are blue in the face. The truth is that until black lives matter, all lives don’t matter.

I’m not anti-cop. I’ve had more positive encounters with law enforcement than negative. One of my favorite cousins retired in the last year from the Scottsdale (Arizona) Police Department. A former roommate is retired from the South Lake Tahoe Police Department. I do believe all professions can improve. When it comes to where taxpayer dollars are spent, that should always be questioned. Any government employee who has a problem being accountable to the public should look for another line of work; go start your own business and see what that’s like. 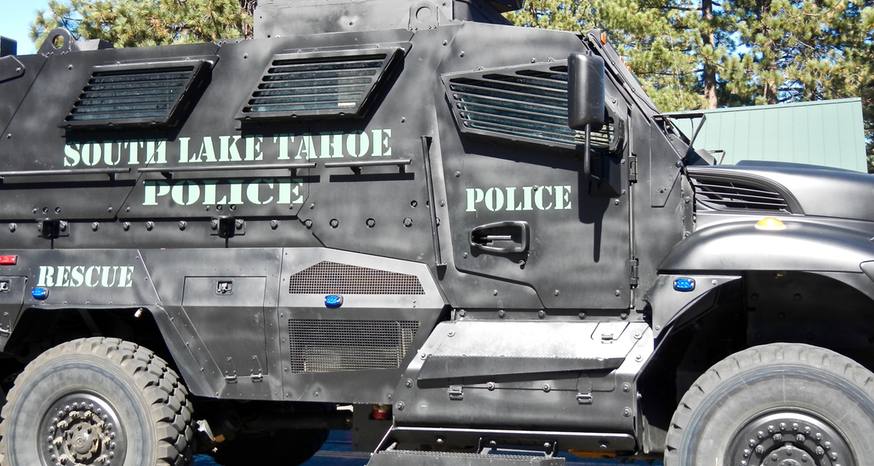 I listened to the June 22 town hall meeting hosted by the city of South Lake Tahoe about community policing. One-hundred thirty people were on the line, 65 comments were submitted before the meeting, while 39 people spoke that night. City Manager Joe Irvin, interim Police Chief David Stevenson, and Lt. Shannon Laney all read prepared statements. It was noted that the police chief recruitment started June 12, with the application deadline being July 10. (Brian Uhler left the department earlier this year.) A community panel will be part of the hiring process, along with a virtual town hall on July 23. On June 17, the local department suspended the use of the carotid control hold. However, this technique is still in the department’s online policy manual. The City Council on Aug. 20 will be asked to purchase body cameras for officers.

I don’t want to literally defund police departments. Unfortunately, I can’t imagine a world where law enforcement isn’t needed—that utopia doesn’t exist and doubtfully ever will. Still, that doesn’t mean dollars shouldn’t be reallocated. It doesn’t mean people shouldn’t ask questions whether these public dollars are going toward the proper resources.

In the town hall the 30-year-old CAHOOTS (Crisis Assistance Helping Out On The Streets) program was brought up as a possible model. Crisis intervention teams help deescalate issues instead of armed officers. How this might be a resource locally is with mental health related calls. Lt. Laney said when he started with SLTPD county mental health officials were at the scene. Today they show up at the hospital, leaving officers who are not trained social workers to be the ones to make initial contact. Mental health is a division of El Dorado County. Their funding has taken a hit through the years. The now-defunct Lake Tahoe News in 2016 did a multi-part series about mental health. This is the story involving law enforcement.

On June 4, this writer asked the public information officers for the city, El Dorado County and Douglas County to provide the budget for each of their respective law enforcement agencies for the last five years and what those figures represented in the jurisdictions’ overall budget. The city’s PIO never responded and when the question was posed in the chat session at the town hall meeting the city clerk said those questions would be answered later on the city’s website. I haven’t seen an answer. El Dorado County’s PIO had an automatic response to the email saying she was too busy with COVID-19 to respond to an email. Douglas County said to check out this link.  It shows the budget for the sheriff’s department under multiple line items including administration, records, jail, cops grant, general investigation, patrol/traffic, vehicles, grants, coroner, school resource officer, operation/patrol, and Tri-Net (the drug task force).

The budgets are difficult for a non-numbers person to decipher. It was disappointing that during the city’s town hall that even a cursory overview of the police budget wasn’t provided. The current budget, which goes through Sept. 30, is online.

At the online meeting it would have been helpful if the city employees would have talked about the race makeup of the police department. Does it represent the community? According to the Census Bureau, the city is 63.4 percent white, 27.4 percent Hispanic/Latino, 5.9 percent Asian, 1.3 percent black, 0.3 percent American Indian or Alaska native, and 0.2 percent native Hawaiian or other Pacific Islander.

A divisive topic was whether an armed officer is necessary at South Tahoe High School. This position is primarily funded by Lake Tahoe Unified School District. Officers, a former principal, and former school safety coordinator were advocates of this position. Community members and at least one former student said this officer is a detriment. It is clearly a topic that needs further, more in depth review.

Some who spoke this week talked of rebuilding the local police force without citing why that needs to be done. A couple people spoke of negative interactions with officers. What wasn’t presented is the number of complaints filed against the department through the years, the number of officer involved shootings, how many times officers even draw their weapons, the race of the suspects, the race of those arrested, locals vs. tourists.

It was noted further training is needed and will occur when it’s possible in this pandemic environment. Biased based classes and crisis intervention are available courses for cops.

Some people asked for a civilian review board without explaining why they felt the need for this. Others want further dialog and regular meetings. This one, though, had no real agenda and didn’t seem to be more than an opportunity for people to sound off. As was pointed out, the public can comment at any City Council meeting—as is true at respective county level meetings. Those online wanted more input from people of color and not just white folks. Making that happen could be tricky when the city knows who is talking, their email and/or phone number. Retribution happens—even here.

Laney, as the department’s public information officer, admitted he hasn’t done a good job of getting facts out to the public. As a reporter in this town for years, I can tell you getting details out of the local law enforcement hasn’t always been easy. They seem to still forget so much is public information. That is where the public needs to get involved—demanding information from the cops (SLTPD, EDSO, DCSO, CHP, NHP). There’s a local FBI office here, not to mention the U.S. Forest Service having law enforcement officers too.

Collectively, the amount of money being spent on law enforcement on the South Shore is astronomical. Is there that much crime to justify it? Let’s look at the books. Then look at when they get to retire (age 50) and how much their pensions are. We are paying these people to stay home to do nothing; sometimes their full salary in retirement. That is what is criminal. They are raping the taxpayer. The changes I would like to see are with police unions, law enforcement retirement ages, and the amount they are paid in retirement.