Plastic is ruining the world. Animals on land and in the water think it is food. It doesn’t decompose. China no longer wants to be the world’s dumping ground, so now it’s near impossible to even recycle it. Plastic is an environmental nightmare.

Individuals, businesses and governments are starting to address the problem. By 2021, the European Union said it will ban single-use plastic. McDonald’s in the next six years will only use sustainable wrappers. 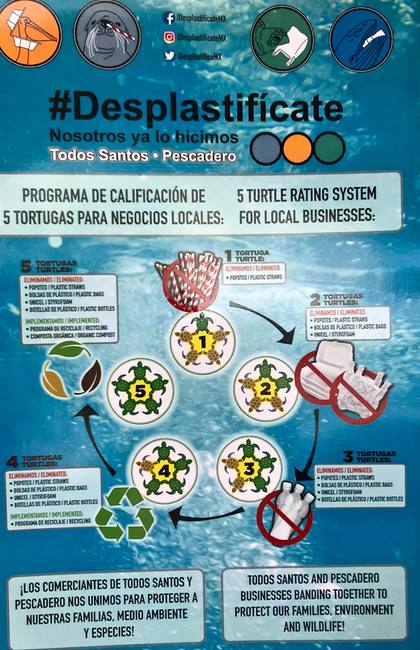 Restaurants in Todos Santos-Pescadero are encouraged to get rid of plastic and do more for the environment. (Image: Kathryn Reed)

In July 2018, elected officials in Mexico’s state of Baja California Sur passed legislation to ban single-use plastic, straws and some polystyrene. Starting Aug. 16, 2019, only renewable/compostable goods will be allowed at stores and restaurants.

It’s wonderful to see many places already getting rid of plastic. La Jardinera in Todos Santos, which is mostly a to-go restaurant, puts food in compostable containers. If people don’t want to compost it, the eatery will take it back and do so. For those who bring their own container, the bill is reduced by 10 percent.

At La Esquina in Todos Santos my leftovers were packaged in a small paper bag. No plastic on anything. This restaurant used to have reusable bamboo straws. Now my smoothie is served without one; even better.

A broader effort is under way in the Todos Santos-Pecadero area to get businesses to participate in what’s called a 5 Turtle Rating System. The first level is eliminating plastic straws; second includes straws, plastic bags and Styrofoam going away; third adds plastic bottles to the list; fourth includes a recycling program; and the top or fifth category adds organic composting on top of everything else.

Signs are up at some establishments to let patrons know it is a participating business.

Using my own bag at the grocery store is pretty routine for me. I was doing so before South Lake Tahoe implemented a ban, which was even before the state of California did. Unfortunately, I’m usually the only one with my own bag at the stores in Todos Santos. That is going to have to change in a few months.

The nonprofit Manos Magicas Todos Santos collected monetary donations for canvas bags that adults and children decorated, and then gave them to the low income Mexican population so they’ll have bags to shop with.

With about 5 billion single-use bags being used throughout the world each year, and most of those ending up in landfills or strewn as garbage on land and in the water, any dent that can be made in using fewer of them is a good thing for all creatures on this planet.