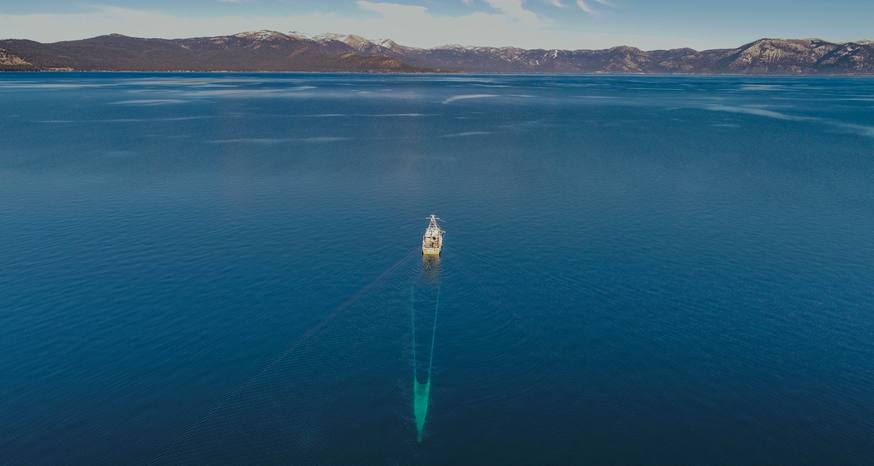 After spending about $2,000,000,000 ($2 billion for those who forgot what all those zeros mean) to improve Lake Tahoe’s clarity, the efforts seem to be for naught. Even so, the Draconian measures placed on government jurisdictions and agencies in the basin by the Tahoe Regional Planning Agency and Lahontan Regional Water Quality Control Board remain intact. The silly idea of having every homeowner and business spend thousands of dollars on erosion control measures—aka BMPs—is still in place even though it’s not the cause of Tahoe going brown.

Fingers now point to mysis shrimp, also known as opossum shrimp, for the degradation of Tahoe’s famous clarity. These tiny critters that grow to less than 1 inch were introduced to the lake in 1963 by California and Nevada fish and wildlife departments in an effort to improve fisheries. This was done at multiple lakes. It was a failure in so many ways. 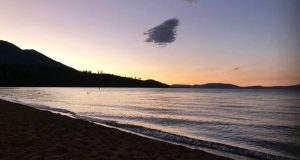 The sun may be setting on the opportunity to restore Lake Tahoe’s clarity. (Image: Kathryn Reed)

“It was seen as an ecological mistake, if not a disaster,” Geoff Schladow, director of the Tahoe Environmental Research Center, said during a July webinar about the shrimp. “It does not seem that we can return to our goals; our goal to restore Lake Tahoe clarity to 97 feet.”

Data released earlier this month show the clarity on average in 2019 was at 62.7 feet. It was at 70.9 feet the previous year. A white disc that looks like a dinner plate is dropped over the side of a boat at various times to come up with the average reading. It’s gauged by the naked eye of someone on board. Measurements were first taken in 1968; the level of clarity was 102.4 feet then.

Starting with the 1997 Lake Tahoe Environmental Summit with then President Bill Clinton and Vice President Al Gore launching the inaugural Lake Tahoe Restoration Act there has been about $2 billion spent on efforts to restore the lake’s clarity. Money comes from the feds, both states, local jurisdictions, and private contributions. Results have been mixed, but never enough to accomplish the goals.

Now an effort is under way to remove the mysis shrimp to see if that will turn the tide. Schladow said this invasive critter has “profound effects” on the food web below and above it. The problem is the shrimp “annihilated” the daphnia population. Daphnia are small plankton that consume algae that cloud the water. While the shrimp have short lifespans, they are prolific at reproducing.

A collaborative project between Tahoe Environmental Research Center, UC Davis Graduate School of Management and UC Davis School of Veterinary Medicine is developing a premium dog food out of the shrimp that is projected to make enough money to keep the harvesting component viable. 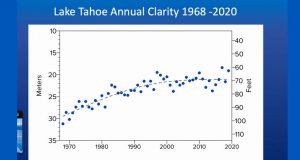 Billions of dollars have been spent to restore Lake Tahoe clarity with little to show for it. (Graphic: TERC)

Yuan Cheng, one of the MBA students working on the project, also spoke during the webinar last month. He said the No. 1 goal is to restore the ecosystem, then create awareness and public education, and third is economics, as in generating enough sales to keep the operation going. A nonprofit is the most likely way to bring Tahoe Mysis Treats to market. Food scientists and creative strategists were added to the MBA program’s team.

The mysis come up from the bottom of the lake at night, making harvesting trickier at that hour. A large trawl net is dragged behind a boat. Bioacoustics is also used to determine where the shrimp are in the water.

Researchers were led to the mysis-daphnia phenomenon when in 2011 the shrimp had all but disappeared from Emerald Bay, the daphnia returned, and water clarity increased by 30 to 40 feet, nearly doubling. (It’s not known why the shrimp left.) This was the first time anywhere that the relationship between mysis, daphnia and clarity had been established. A five-year study was started with private money that confirmed this link. Then in 2018 a two-year study began to determine if the shrimp could be harvested to levels that would allow daphnia to return.

The next step is to launch a pilot study in Emerald Bay in fall 2021 to determine how quickly the shrimp can be removed and how fast clarity is restored, outline the cost constraints, and determine the market demand for the product.

This would not be the first time a tiny critter was harvested from the lake in hopes of improving water clarity. Crayfish were the rage several years ago with more than one commercial outfitter working traps and selling the crustaceans to regional restaurants. Those businesses are no longer operating.