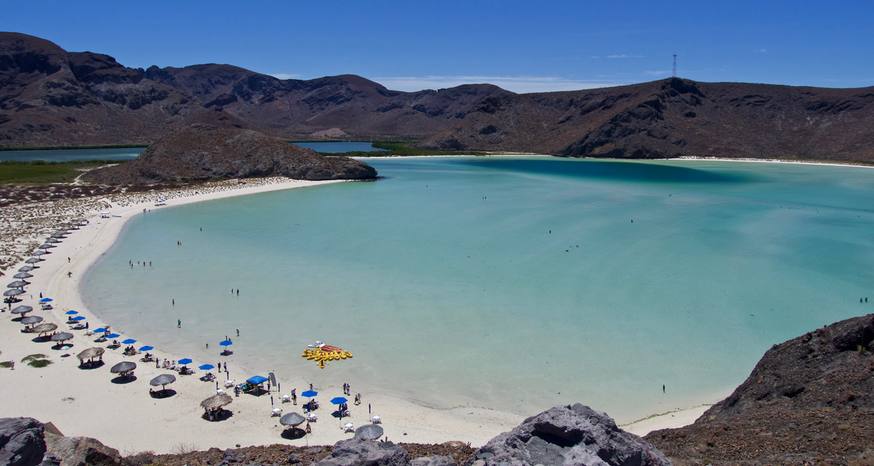 The government starting in 2012 has listed Balandra Beach as a protected area to preserve its pristine nature. (Image: Kathryn Reed)

Water so clear I could fill my bottle with it if only it weren’t salty. A warmth that is inviting enough to dive in if only it were deeper. Beauty that necessitates the camera not stay in the waterproof pouch.

A kayak is not needed to enjoy Balandra Bay – it’s that shallow. The human-powered vessel is perfect, though, for rounding the corners to explore a bit more and to get to the main waters of the Sea of Cortez.

This spectacular oasis in La Paz is a popular spot for locals, expats and tourists. The white, sandy beach is so soft it’s almost like walking on cotton balls. The water, a hue of turquoise that is mesmerizing. A depth that is more ideal for wading than swimming, at least right in the bay.

Down, up, straight ahead. There is something to see in every direction. 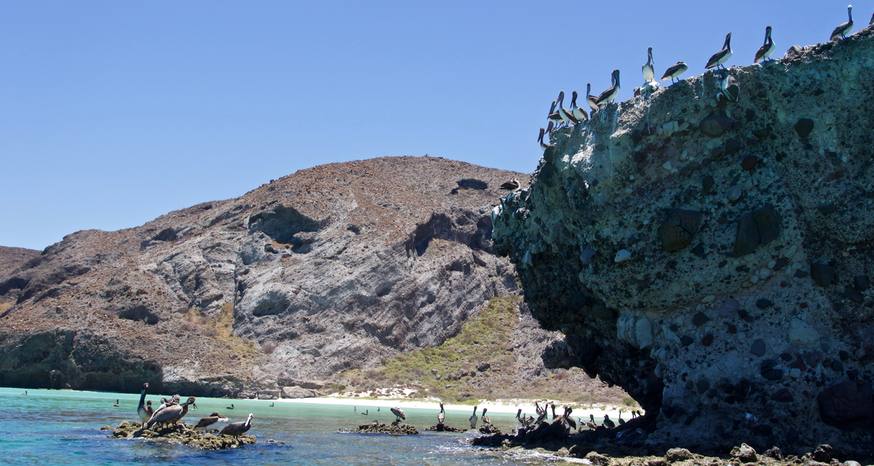 Pelicans scope the water waiting to catch their next meal. (Image: Kathryn Reed)

Fish tend to hang out near the mangroves. The more colorful ones were found going around the point on the right. Last fall it was mostly what I call bumble bee fish; this is based on their yellow and black stripes. In April, the biggest variety of underwater life was seen – a sting ray, moray eel, red crabs, and many more creatures. 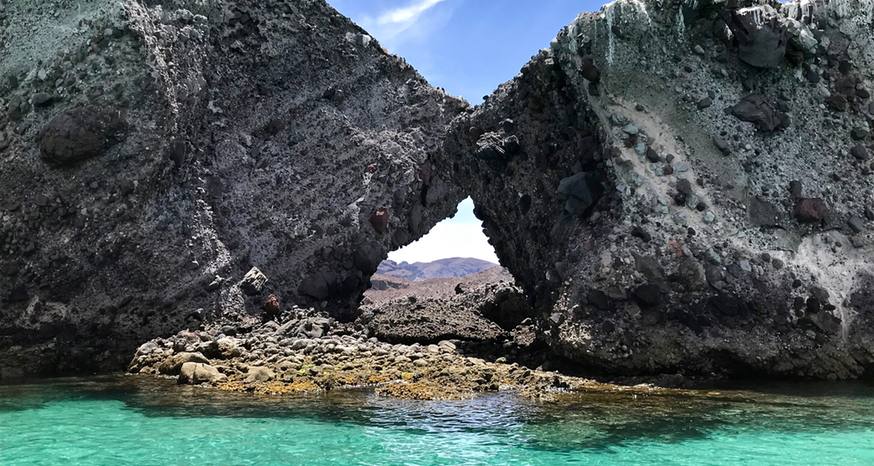 This spring is when the birds have been most abundant, with the pelicans seemingly having an endless feast as they repeatedly dove in the water. They paid little attention to all the people; getting closer than I am accustomed to.

The May excursion included a scamper up the rock formation to the right from the beach as you drive in. It’s less than a half mile round trip. My app says we gained 35 feet, but it felt like more – not much more, but still. Regardless, it’s worth doing; bring something other than flip flops for this. 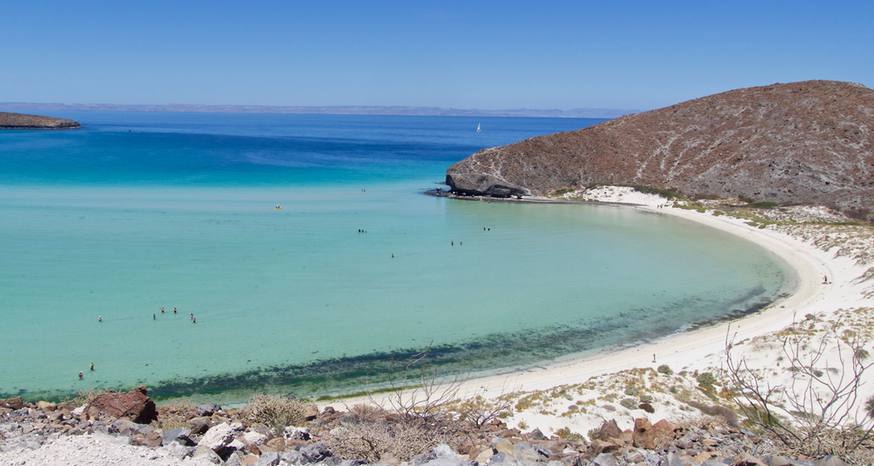 El Hongo beach and looking to the Sea of Cortez from the rock at Balandra. (Image: Kathryn Reed)

The bird’s-eye view had me gaping in awe. The white sand giving way to the aqua blue then to a navy blue in the middle, with mangroves in some areas and the stark desert all around was almost too much to take in.

To the right is El Hongo (mushroom) beach – more sand saying, “Come walk on me, your feet will practically melt.”

A day before the May visit we got a brief tour of the area by boat before heading out to Isla Espíritu Santo. Another stunning perspective. 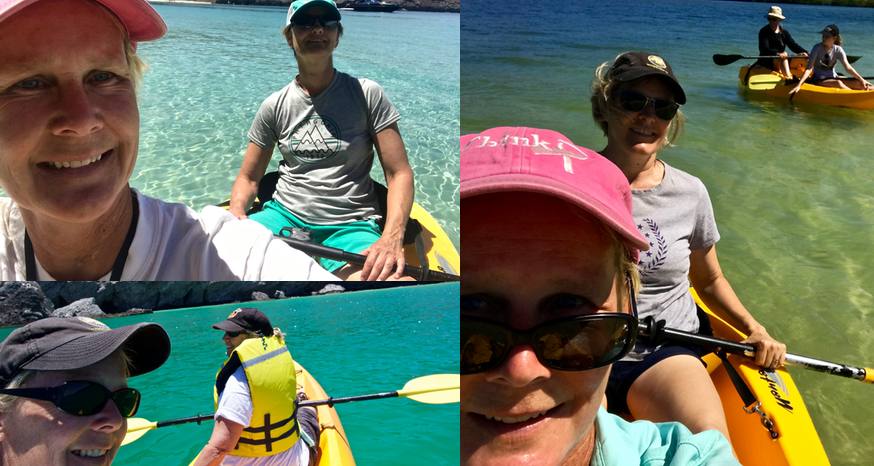 Kayaking, from upper left to right, with Darla in April, Penny-Tim-Laura in October, and Sue in May. (Images: Kathryn Reed)

While much is written about the mushroom shaped rock that is to the right of Balandra, it isn’t that spectacular. Our boat guide said it crumbled under the weight of a soccer team, and then the government rebuilt it.

The other volcanic rocky formations are more interesting. 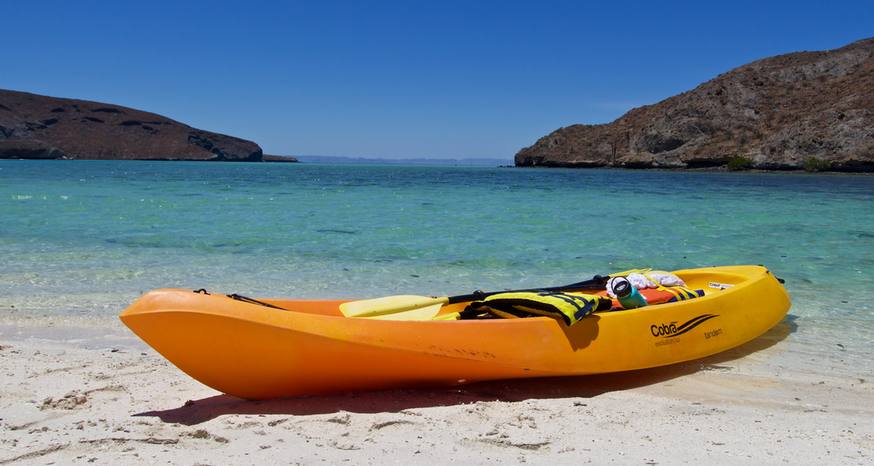 It’s hard to know which is the best month to kayak Balandra. I’ve done so in October, April and May. Like most paddles, wind will be the biggest variable. Each month the water was warm enough to take a swim. Weekends are busier. Nonetheless, I’ve been able to rent a kayak without a reservation each time. They are tandems, which was perfect for my needs with various friends.

Each experience has been a bit different because of paddling to various sections of the bay and then beyond. The main beach, the ones in the bay and just outside of it to the right, along with the water, land masses and aquatic life are captivating no matter how you experience Balandra.