Will ‘The Thrill’ Clark forever a Giant with number being retired 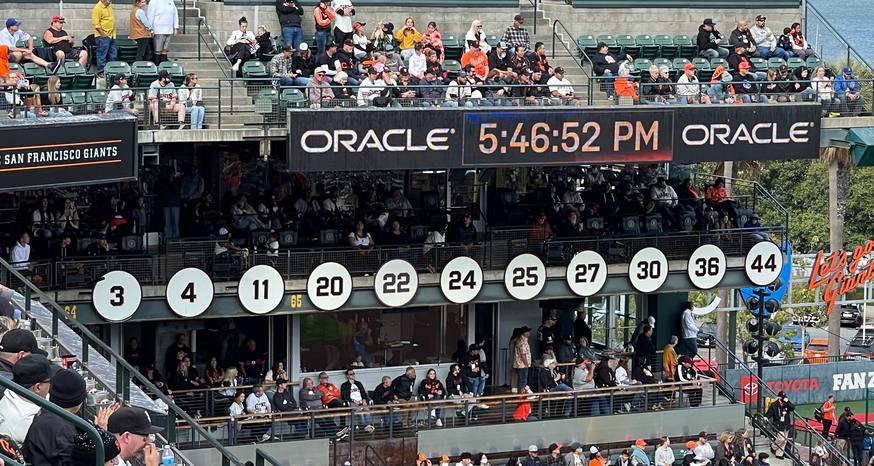 The San Francisco Giants retired Will Clark’s number last month in a ceremony that was one of those once in a lifetime experiences.

Considering the former first baseman’s number was only the 11th to be retired by the San Francisco Giants this clearly is not something that happens often. (Two other numbers have been retired from the New York Giants.)

More than one person who spoke Saturday summed up Clark as “intense.” 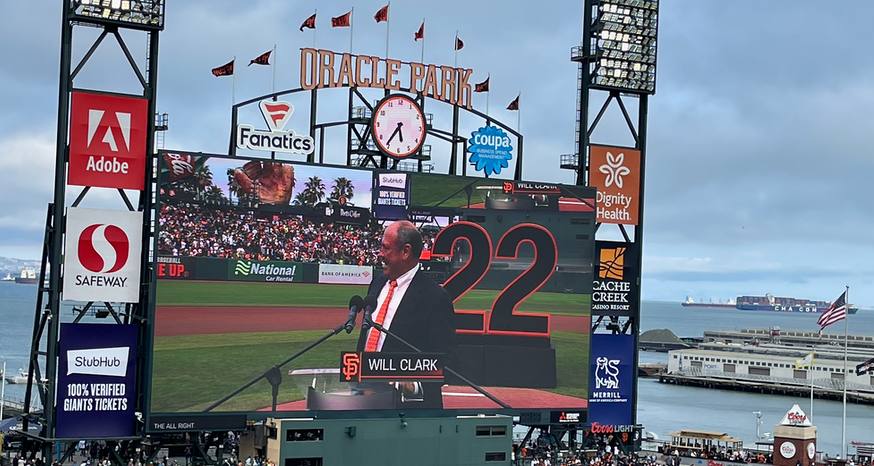 Will Clark on July 30 addresses the fans at Oracle Park in San Francisco. (Image: Kathryn Reed)

His former teammate, housemate and now broadcaster Mike Krukow said of Clark, “He made it cool to be a Giants fan again.”

Clark was one of my favorite players. He was fun to watch. He cared. He gave it his all. He was dynamic. This was when I was just becoming a true Giants fan. This was before I was part of a season ticket group. Before the fancy new ballpark.

Clark played for the Giants for eight years starting in 1986. This meant he was at Candlestick Park his entire playing time with the Giants. During his speech he gave a nod to that windy stadium, exaggerating just a bit about how it could be difficult to find the ball among all the swirling hot dog wrappers.

His nick name was Will “The Thrill” Clark for his athleticism on offense and defense.

Clark started his career by hitting a home run off future Hall of Famer Nolan Ryan. An even more memorable swing of the bat was the grand slam he hit in the 1989 National League Championship Series against the Chicago Cubs. This was the only grand slam Greg Maddux gave up in his career. 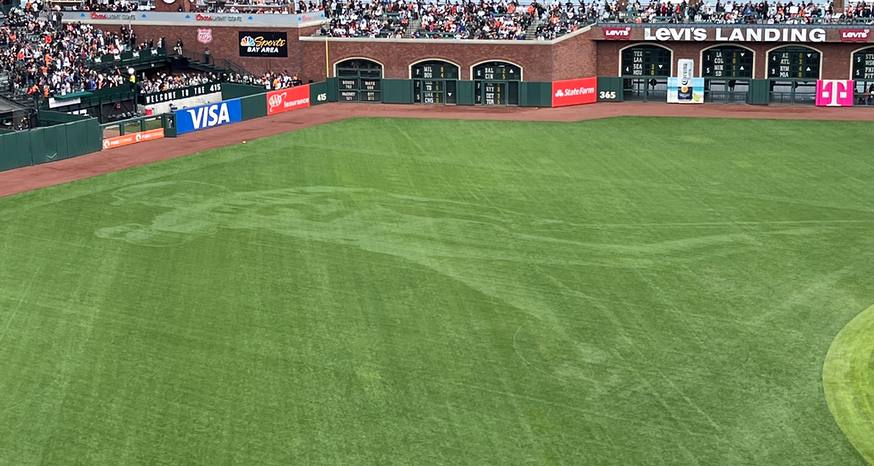 Will Clark’s likeness in the outfield at the San Francisco ballpark. (Image: Kathryn Reed)

Prior to the Giants retiring Barry Bonds’ No. 25 in 2018 the team had a policy of retiring numbers of players who had been inducted into the Hall of Fame. Those who know baseball will understand why the Giants changed their policy.

Beyond Bonds, though, think of all the players whose numbers might be retired going forward. Not that everyone’s should be, but it’s intriguing to contemplate who might be next—well, other than Buster Posey, who I believe will be in Cooperstown one day, so that’s an automatic retirement.

As Clark said of the retiring of his number, “This is my hall of fame.”

It’s hard for me to imagine a greater honor in sports than to have one’s number retired. The fact Clark only spent eight of his 15 years in the Big Leagues in San Francisco also proves his impact on the team and fans.

Clark wrapped up his 15-minute speech by saying, “I am Will ‘The Thrill’ Clark. I am a part of San Francisco. And I am forever a Giant.”