The 9.2 earthquake that shook Alaska on March 27, 1964, and created deadly tsunamis not only changed the landscape of the state, it fast-forwarded the scientific understanding of earthquakes and other geological phenomena.

New York Times science reporter Henry Fountain in his book “The Great Quake: How the Biggest Earthquake in North America Changed Our Understanding of the Planet” (Crown Publishing, 2017) takes readers on a humanitarian and scientific journey. The book is masterfully written. 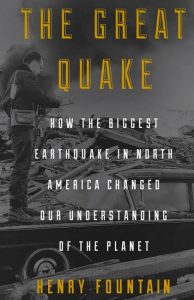 George Plafker, a geologist with the U.S. Geological Society based in Menlo Park, California, is the main focus of the narrative. Plafker arrived in Alaska the day after the quake to begin field work. His boots on the ground investigations led to discoveries about how the earth moves and the consequences.

“The collapse of the Valdez waterfront and the slides in Anchorage were just two elements of the destruction in Alaska that revealed, to an extent seldom seen before, the dangers of soil liquefaction during an earthquake. Engineers learned that identifying soils at risk of failing in a quake was as important as designing structures to withstand shaking. Earthquake codes were made stricter, in Alaska and elsewhere,” Fountain wrote.

Most earthquakes are measured in seconds. This one was about five minutes.

What Fountain is able to do is elevate what can be dry science into prose that makes even the non-scientist want to know more, to learn. The author also weaves in tales about the people who called Alaska home. After all, the tumbler didn’t just move the earth, it forever altered lives by wiping out towns and killing dozens. It wasn’t just people in Alaska who died. The waves flowed down the West Coast into Baja California. Several people in Crescent City, California, died from the tsunami.