A monument like Mount Rushmore probably would not get built today because of environmental reasons, as well as government regulations.

It’s a good thing it was constructed when it was – between 1927 and 1941. Even then there were plenty of hurdles to overcome. 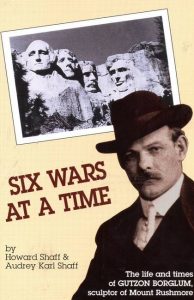 In the book “Six wars at a time: The life and times of Gutzon Borglum, sculptor of Mount Rushmore” (Pine Hill Press, 1985) authors Howard Shaff and Audrey Karl Shaff delve into much more than the faces carved into the granite in South Dakota. This book is the story of Borglum – his family, his relationships in the art community, and with most of the presidents during his lifetime. It gives a great understanding of the life of an artist.

While Borglum is a fascinating character, the authors were cognizant of what was going on at the time – world wars, the Great Depression, politics, and more. Borglum was involved in so many world events, even if it was merely by expressing his opinion.

The authors paint a portrait of a complex man who didn’t mince words. He was not satisfied to let his art speak for itself.

While Borglum has works throughout the world, it is Mount Rushmore that he is most well-known for. For anyone who has seen the monument, this is another piece of the story that is worth reading.