Book Review: A griping look into the paid prison system in the U.S.

The older I get the less it is that I seem to know. Thank goodness for books. I wrongly thought private for-profit prisons were a rather new phenomenon. Wrong. Very wrong.

Shane Bauer in American Prison: A Reporter’s Undercover Journey into the Business of Punishment (Penguin Press, 2018) takes readers (or listeners as was the case for me) through the gritty details of prisons in the United States. If you don’t believe the system needs reforming, this book is bound to change your mind. 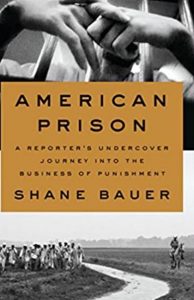 Bauer was a reporter for Mother Jones magazine when he went undercover in 2014 at a private state prison in Louisiana as a guard. What makes that undertaking even more profound is that Bauer had been a prisoner prior to that experience. He was jailed for more than two years in Iran on made up charges of espionage. He and two friends had been hiking when they were taken into custody.

In the book Bauer explains his approach to the story, how he collected information, and shares the personal changes he undergoes while working in the prison. But it’s much more than an indictment on the prison system and the company he worked for. Bauer delves into the history of prisons in the United States. It’s those details that were even more alarming to me.

The racism, barbarianism, the inhumanity of it all was overwhelming at times. I was repulsed, I got angry, and was sad.

Still, I wanted to know more. As I kept listening, I kept learning. This book is bound to open most people’s eyes to a topic many of us have little or no experience with. Yes, it’s about prisons. But it’s so much more. It’s about our history and how we continue to treat people behind bars.

It’s about how we are letting others make a profit off treating fellow human beings as subhuman. It’s not right. Bauer’s writing is excellent and will keep you turning the pages.