The Divine Miss Marble: A Life of Tennis, Fame, and Mystery (Penguin Random House, 2020) is bound to appeal to people who don’t play tennis, but it is definitely a book for those who love this racket sport.

Robert Weintraub’s biography about Alice Marble (1913-1990) filled in pieces of this tennis star’s life that I did not know. It also corrects some of the errors or omissions from Marble’s two memoirs; one of which I’ve read. 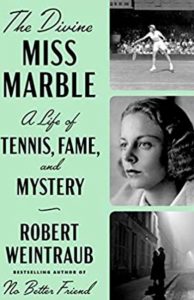 Marble played at a time when the major tournaments like Wimbledon and the U.S. Open were for amateurs. This meant no money, just a trophy. How she made ends meet is all laid out in the book.

She won 18 grand slam events—singles, women’s doubles and mixed doubles. She is in the Tennis Hall of Fame.

She was born in Beckwourth, California, grew up in San Francisco, then lived in Southern California, and spent her last years in the Palm Springs area. She left her mark on the tennis world every place she lived once she took up the sport.

This book is more than tennis. It’s a glimpse into what the world was like at this time—politically, before-during-after World War II.

Marble was friends with A-list movie stars. She was a frequent guest at Hearst’s San Simeon. Will DuPont was one of her benefactors.

She was coached by Eleanor Tennant. Plenty is written about Tennant, who was a force in the tennis world.

For anyone who likes books about athletes and likes to learn about the time period the person played, this book is for you.