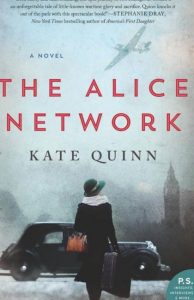 Before a friend recommended this book to me I had never heard of The Alice Network. It was run by Louise de Bettignies during World War I. Her code name was Alice.

The book mostly focuses on one of the women involved in this female spy network in 1915, along with a U.S. college student who in 1947 is dealing with a slew of personal issues. It’s not long before their paths cross.

Quinn weaves the story lines in rotating chapters until they blend into the same time period.

The book is captivating. The suspense had me wanting to keep listening along my long drive.

It made me want to know more about this all-female spy operation. There must be a non-fiction book about them.

In the meantime, The Alice Network is sure to entertain readers.