The American Dream seems like a pretty simple concept. We have this belief in the United States that if you work hard, your life will be on an economic upward trajectory that is likely to include a home, enough food and plenty of happiness.

It’s this dream that leads so many people—legally and illegally—to the United States. 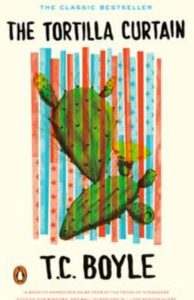 “The Tortilla Curtain” (Penguin Publishing Group, 1996) by T.C. Boyle is as relevant today as when he wrote it.

It’s the story of the lives of Candido and America, a couple who crossed the border illegally with the desire to have a better life than the one they came from. It’s also about Delaney and Kyra, another couple, who are rather liberally minded.

The four are living in the canyons of Southern California, but only the natives have a conventional home.

All four lives intersect in ways they did not expect nor did they necessarily want. These interactions and their introspection keep the reader captivated. Boyle does a great job of not taking sides with one character to make that person the protagonist.

I could tell you, but I won’t, who I think was the better person of the four.

This novel could easily have been non-fiction, which is why it is so gripping. It’s not just a story of four lives. Boyle makes the reader think, to examine what she might do in the situation of each of the main characters.

It proves that life is neither black nor white; it’s a deep shade of gray that requires each of us to dig deeper for more understanding and less judgment.