Book Review: ‘Astronaut Wives’ a trip to another time and place

Plenty has been written about the men in the U.S. space program, but what about their wives?

After all, it was a prerequisite at the start of NASA’s space endeavors that the astronauts, who of course were all male at the time, be married. They were to exhibit what a perfect American family looks like. But we all know there is no such thing, no matter how hard one tries. 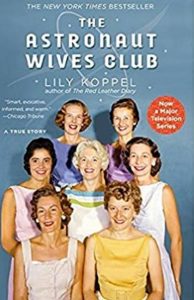 Lily Koppel takes readers on a journey to a land far, far away known as the United States starting in the late 1950s in her book The Astronaut Wives Club (Red Leather Diary, 2013). The book focuses on the original seven wives of the men in the Mercury program, then nine women who came on board with the Gemini program, and then the 14 who were part of the Gemini and Apollo missions, and the next 19 wives whose husbands were selected in 1966.

It’s not so simple being the wife of an astronaut—a profession that was brand new, and is still so limited in its numbers today.

Suddenly, with the Life magazine contract these women were obligated to open their homes to reporters and photographers in ways most people will never be subjected to. Then the masses of journalists infiltrated their lives when launches were about to happen, afterward, and when tragedy struck.

I was surprised how much I enjoyed this book. It gives more than a glimpse into what life was like for these women as they navigated this new terrain, and mostly while their husbands were gone for extended periods of time training. Financial issues, alcoholism, infidelity, jealousy between the men as well as the women, and the evolution of their lives fill the pages. Relationships with each other, their husbands, NASA are all fair game.

It’s a book that essentially tells the rest of the story. Stories many of the astronauts probably didn’t even know because they were so seldom home. It certainly gave me an appreciation for a group of women who I knew nothing about prior to this book.