When someone is in the public eye it can be easy to assume you know everything you want to know about them. Rarely, though, is that the truth. There’s the public persona, and then the private.

In “Becoming” (Penguin Random House, 2018) first lady Michelle Obama reveals intimate details about life before the White House, during her eight years there and as she was leaving. It was wonderful to hear her narrate the book, to be able to get the inflection, to almost be able to envision her saying the words. 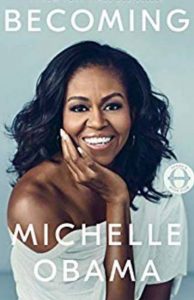 Being black, born on the South Side of Chicago to parents who were far from wealthy, well, it didn’t seem like she would end up at 1600 Pennsylvania Avenue. The odds of her obtaining degrees from Princeton and Harvard were also against her.

Politics aside, Obama’s story is one of hope and inspiration. It’s about how hard work can pay off. It’s about learning to believe in yourself and overcoming the question of whether you are good enough. It’s trusting others and knowing when not to, it’s asking for help and accepting it when offered, it’s putting yourself first and realizing sometimes you have to take a back seat.

The book delves into the struggles she had with her husband, Barack. How it was difficult to put her career aside in favor of his. How politics is not something she would have chosen for either one of them.

How Obama was an advocate for as much normalcy as possible for her daughters growing up in the White House was refreshing. Secret Service officers would be dressed in shorts, not use earpieces – all in an attempt to fit in to the crowd as they kept an eye on the first daughters. The two girls were able to go on sleepovers, to school dances, out for ice cream with friends, all because their mom was their advocate. Obama learned this from her own mother who was there for her when she needed her from childhood and well into adulthood.

“Becoming” isn’t political, but Obama does share opinions. Mostly, though, it’s her life experiences. What a story to read – or hear, as the case may be.