While I knew a lot about Billie Jean King before I read her autobiography, there were plenty of new nuggets in this more than 400-page book.

All In (Alfred A. Knopf, 2021) is definitely comprehensive. It’s so much more than tennis, though. 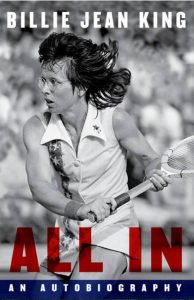 When President Barack Obama awarded her the Presidential Medal of Freedom, the highest civilian honor, he said it was for “all the off-the-court stuff.” It proves how multidimensional King is. She is still a huge advocate for women’s rights as well as the LGBTQ+ community.

There is a depth to this book, which is why it’s so long.

I can see it being of interest to people who are not tennis fans, but doubt they will read it. There is just so much tennis—which as a fan and a player—was wonderful.

I have been a fan of King’s for decades. My junior racket was a Billie Jean King autograph. I wish I still had that wood stick.

When the book first came out last year the Los Angeles Times book club hosted her, which I listened to. It was great to hear her talk and not merely read her words.

King really is a living legend.