The problem is history has not been written from an objective point of view, let alone all points of view. 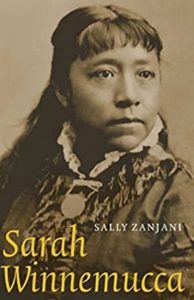 I probably would not have read “Sarah Winnemucca” (University of Nebraska Press, 2001) by Sally Zanjani had I not been given the opportunity to borrow a few books from a friend’s library. Her extensive collection is filled with books about and by women.

Sarah Winnemucca (1844-91) was a member of the Paiute tribe living in western Nevada.

She was revered and reviled by her own people as well as whites. She was a staunch advocate for her people, but she also married more than one white man. She was a believer in education and thought her people should learn English. This, too, was met with conflicting reactions.

Winnemucca was complex, which comes through in the book.

What also comes through clearly is the horrid treatment of Indians by the U.S. government, military and others. This obviously was not new to me. But how Zanjani wrote certain sections it drove home the turmoil in a more personal way with Winnemucca at the center of the strife.

One of the things I like about biographies is that they often are history books, too, because they delve into what was going on at the time—explaining how the person being written about fit into a particular time period.

Slowly, I’m gaining a better of understanding of the world before I was born, which helps me appreciate the continuing disparity of today.

There’s a Job-Market Riddle at the Heart of the Next Recession - Bloomberg https://apple.news/Awyq9MnmKQ7W7u_tfONpikg