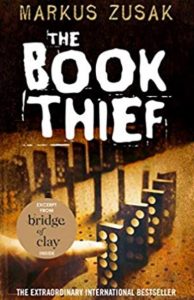 Having heard such wonderful things about “The Book Thief” (Alfred A. Knopf, 2005) led me to keep going even though I was close to moving on to the next book. It’s one of those books that didn’t grab me at the get-go. I’m so glad I persevered.

This historical fiction is based during World War II in Germany. One of the premises is that it proves how books and reading in general can be such a salvation. They certainly were for Liesel Meminger, the main character.

Meminger—is a young girl coming of age in Nazi Germany. While you may think you’ve read enough books about this time period, don’t let this back drop keep you from picking up “The Book Thief.”

There was a depth to this book that I didn’t expect. The characters are believable. The humanity of the book was gripping.

I had not read any reviews of the book; I had only heard from friends/family about it. All positive. What no one told me is the book’s narrator is death. Yes, really. While that may sound odd, abstract or even creepy, it totally works. Trust me.

The book has been made into a movie. I haven’t seen it.