Even though “Bushwhacked: Life in George W. Bush’s America” (Vintage Books, 2003) came out during his presidency, it is relevant today because of the history lesson it provides.

The late Molly Ivins wrote this bestseller with Lou Dubose. She uses her clever way with words to capture some of the more underhanded tactics of Bush when he was governor of Texas as well as president of the United States. Ivins, as a journalist with roots in Texas, had a front row seat to much of Bush’s political career. She was a well-respected writer with the New York Times, a syndicated columnist, and was twice nominated for a Pulitzer. 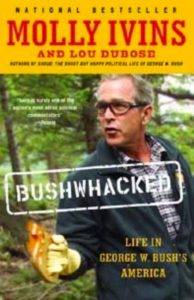 These days people talk about how it would be nice to have someone like Bush back in the White House instead of the current occupant. Reading this book will jolt sense back into people to remember how life wasn’t so good then either.

The corruption is mind blowing. The ineptness despicable. The cavalier attitude toward those less fortunate criminal. The lack of regard for the environment shameful. I could keep going.

What is great about “Bushwhacked” is that Ivins weaves such serious topics in an entertaining, captivating manner. Her writing is superb. By telling the story of real people she shows how policies impact people. She shows how greed corrupts.

For some this will be a refresher about the Bush years, for others it will be a history lesson. Topics include Enron, food processing legislation, education policy, Saddam Hussein and Iraq, cronyism, consequences of tax cuts, superfund sites, and the politicization of the judicial system. This should be a must a read before the November election.