Page after page I was learning something new. I love books like this.

The Woman Who Smashed Codes: A True Story of Love, Spies, and the Unlikely Heroine Who Outwitted America’s Enemies (HarperCollins, 2017) by Jason Fagone is riveting. 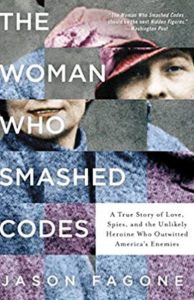 It’s a story about a woman in the United States whose story had not been told until five years ago. Another woman written out of the history books.

Elizabeth Smith Friedman was the top code breaker in World War II. She also had a significant role in the first world war and with drug smuggling rings. In the second war she was intercepting Nazi radio traffic in ways that helped the Allied armies.

Her husband, William Friedman, was in the same line of work. He is the one who got the public glory.

Theirs was an interesting story in how they met and got into this line of work, as well as their life during and after the wars. Both working in secret, they could not come home at the end of the day to share what they were working on.

But most fascinating was the work itself. This book is as much about the Friedmans as it is the history of code breaking. It’s mind-boggling to think about the work they did without the aid of computers.

It’s also a history lesson about the evolution of agencies that today we seem to take for granted, like the FBI, CIA and NSA.

J. Edgar Hoover in many ways is the villain in the story, which probably doesn’t surprise too many people.

A big surprise for me, though, was South America’s involvement in World War II, in particular the allegiance to Germany by so many of the countries.

I highly recommend this book.