Those are just some of the words I would use to describe Caste: The Origins of Our Discontents (Random House, 2020) by Isabel Wilkerson. 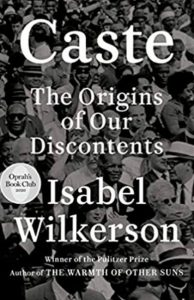 I had never thought of the United States of having a caste society until Wilkerson laid out the facts for me. I’ve used a lot of words, OK, maybe just a few to describe the inequities in our country. I just never used caste.

But it’s more than the choice of words. I really have to accept there is a tiered system in the United States; even today.

This is not an easy book to get through, but it is one I think everyone should read or listen to. It’s so powerful.

She primarily compares the castes of the United States, India and Nazi Germany. It was so alarming to learn how the Nazis used the United States as a model to oppress people, and that even some of what was going on here was too much for them to adopt.

Examples of the bigotry, hatred, racist, inhumane behavior are so hard to hear. (I listened to the book.) I forced myself to keep listening. It’s the least I could do. Clearly, we have not evolved much as a society.

One line in particular struck me when Wilkerson said so many people in the United States are willing to side with being white instead of siding with the Constitution. She said it a little more eloquently, but the sentiment is the same.

I know I have white privilege. It’s how I use it that matters. I want to work toward a world where no one’s skin color gives them a better or worse life than someone else.

While I’m not doing anything substantive to change the world, I do believe educating myself about the inequities, sharing what I’ve learned, and talking about it are at least a start. From there, perhaps I can help effect some positive change.

One day, though it won’t be in my lifetime, it would be wonderful if the caste system in the United States were abolished. It won’t happen, though, if those of us in the upper caste don’t start doing more, and doing it soon.