“A higher loyalty: Truth, lies, and leadership” by former FBI Director James Comey (Flat Iron Books, 2018) is much more than a look at Secretary of State Hillary Clinton’s email brouhaha and his limited time with Donald Trump as president. 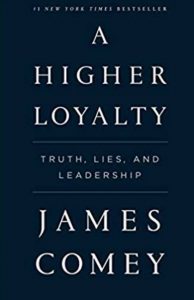 The book starts with Comey as a child and builds from there. It’s a narrative that is important to understand what brought him to one of the top law enforcement positions in the country.

Comey was the deputy attorney general in George W. Bush administration. It was Barack Obama who tapped him to lead the FBI. Trump said he wanted to keep him on. He did – then he was fired in May 2017.

Plenty of people still blame Comey for how he handled information about Clinton’s emails prior to the 2016 presidential election. Some say his “interference” helped seal Trump’s triumph that November.

Comey explains his actions in the book. The full letter he gave Congress is in it. This was interesting to read; the details seemed to get lost in the media at the time. While it was easy at the time and easier now to criticize Comey for talking about emails – again – in October 2016, he explains his reasons as only someone with ethics could do. Most people act on emotion and don’t always vet all the consequences. Comey writes about the laborious process within the FBI about when and how information is disclosed.

This book is a great look at the United States’ top law enforcement agencies, and the pressures those men and women are under by whomever is sitting in the Oval Office.

Comey’s descriptions of Bush, Obama and Trump probably won’t come as a surprise. However, the contrast is startling. Comey, a lifelong Republican until after his firing, had the most complimentary things to say about Obama.

This is a fast read – and one I recommend no matter party affiliation.