Remember when paperbacks were much smaller and the type seemed microscopic?

I was given one of those books several years ago by someone in South Lake Tahoe who was sure I would love the book. He was an avid reader. Books were something we would discuss; mostly I listened because he read so much more than I. 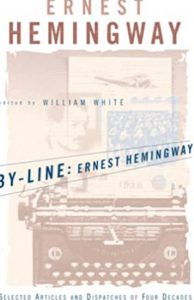 The type was too little. I just couldn’t do it. And I tried more than once.

I finally decided to see if I could get an audio version. Success. It’s too bad Bill Crawford died a few years ago so I can’t thank him for the recommendation.

It’s a selection of Ernest Hemingway’s writings from the 1920s to the mid-1950s. Most are his essays originally published in various newspapers and magazine in the United States. Some are about war, some about hunting and fishing, some about life abroad.

Most books that are a compilation take me some time to get through because one story does not necessarily build on the preceding one. It’s not like I’m eagerly waiting to find out what happens next, so to speak. Patience was worth it.

As White writes in the introduction, “As a reporter and foreign correspondent in Kansas City (before World War I), Chicago, Toronto, Paris, among the expatriates, the Near East, in Europe with the diplomats and statesmen, in Germany and Spain, Hemingway soaked up persons and places and life like a sponge: these were to become matter for his short stories and novels.”

Hemingway has been one of my favorite writers for years. But I can’t remember when I last read (or listened to) something he authored. This book was a wonderful history lesson of sorts, but it was also a delight to hear his words. His descriptors are off the charts colorful. I was reminded why I hold him in such high esteem as a writer.