Often when the border wall between the United States and Mexico is talked about it has to do with keeping immigrants out. Discussions seldom occur about the drugs being brought in as well as the guns going in the other direction.

A wall isn’t a new idea. Presidents before the current one started the process. What changed was Sept. 11. Homeland Security became a department in the U.S. government. Fear grabbed hold even tighter. Rules were implemented without logic, and budgets increased to hire the manpower and toys to demonstrate strength. 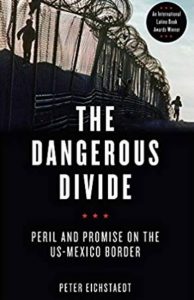 The reality is if terrorists are entering the United States through Mexico, they have never been caught. Safety is a reason for spending billions of dollars on a wall. It’s the reason given to hire more people and invest in technology. But that border isn’t a national security threat even though the government acts like it is.

Peter Eichstaedt in his book “The Dangerous Divide: Peril and Promise on the U.S.-Mexico Border” (Lawrence Hill Books, 2014) deftly illustrates that the United States’ immigration policy is woefully lacking and that the wall is not making anyone safer.

Eichstaedt was in Todos Santos in February to discuss his novel “Borderland” that was based on research he did for “The Dangerous Divide.” Unfortunately, I was not able to attend the lecture. However, both books are available at El Tecolote bookstore in Todos Santos, Amazon and other locations.

In “Dangerous Divide” people tell their stories of why they are crossing the border. Border Patrol agents and others explain their reasons for wanting to stop people from coming illegally. Others offer solutions to benefit both countries.

Eichstaedt delves into the economic reality that the U.S. and Mexico need each other because of commerce.

What often is missing in news reports in the U.S. about the drug cartels in Mexico is where they got their weapons. They are being illegally smuggled in from the United States where they are legal. There wouldn’t be a drug trade if people in the U.S. weren’t using. At some point the United States has to take responsibility for its role in what is really going on at the border. This and so much more are all points made by Eichstaedt.