In the 21st century it seems like a given that in the United States parents will ensure their children are educated. The problem is that education varies dramatically.

Tara Westover in her memoir “Educated” (Random House, 2018) clearly illustrates the various ways one is educated as a child will have a lasting impact. Education comes in many forms – not just reading, writing, arithmetic. It’s life skills, interpersonal relationships, even hygiene. 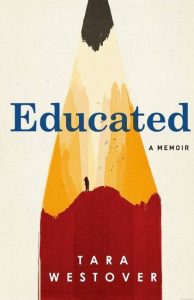 Westover didn’t receive a conventional education in any sense of the phrase. Her parents, in particular her father, thought all things government were evil. This included, but was not limited to, education and medical institutions. Her parents’ fanatical version of Mormonism was the norm through her eyes, not extreme as most would have interpreted it.

As is true of many young kids, Westover believed what her parents told her. Stock piling food, gasoline and other provisions for the end of the world seemed normal.They were living in Idaho, in the heart of white supremacy land.

Still, Westover knew her family was different. There were even times when she questioned what was taking place, like the physical abuse by one of her older brothers. But she didn’t know how to challenge her aggressor or get others to believe her.

Fortunately, she had another brother who broke the mold by figuring out how to get into college. He encouraged Westover to do the same. Even her mother initially pushed her to go.

Westover was accepted into Brigham Young University. She was not like the other students in so many ways. Westover thought she was asking a rational question about the Holocaust only to realize it was taken as mocking this tragedy. She didn’t know what the word meant. This was one of many examples where Westover’s lack of normal education put her at a severe disadvantage.

I started reading the book thinking I would not like it based on the discussion at a book club last summer. I had attended my old book club’s meeting in Tahoe even though I had not read the book. Reviews from my friends were mixed.

I finished the book with similar mixed feelings. In many ways it read like fiction because it’s hard to believe people like this exist in the world today or that someone with her upbringing ends up graduating from Cambridge and Harvard. I was left with many questions that likely would have been answered had this been a biography. My guess, though, is the only way for this book to get published and have the success it has is for it to be a memoir. That leaves us with trusting Westover’s memory and what she wanted to rely on from others.

What frustrated me about the book is I never felt her raw emotion, her anger. The writing is controlled, almost like it was another paper for college. I question whether her editors had something to do with this to make it more palatable to the public, to be just edgy enough to become a New York Times bestseller. Or maybe Westover still hasn’t found her true voice or come to grips with all that happened to her.