Historical fiction can fluster me because I’m often wondering what is true and what isn’t—especially when I know little or nothing about the topic. Sometimes I have to tell myself to go along for the ride, so to speak.

Such was the case with The Engineer’s Wife (Sourcebooks, 2020) by Tracey Enerson Wood. In this instance, she reveals key truths and bits of fiction at the end, so that was helpful, informative and a bit disturbing. 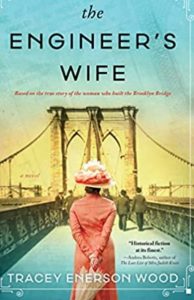 Two of the main characters are real—Emily, the engineer’s wife, really did finish the building of the bridge when her husband got ill. P.T. Barnum is also a real person. But what was so alarming is that the author essentially has these two become romantically involved and that never happened in real life. To me, this was too much literary license.

The book is about how the Brooklyn Bridge in New York got built, which was interesting. It’s easy to take for granted things that are already in place. It’s a marvel how so much has been created without the technology or tools of the 21st century.

But there is so much more to the book than learning some of the details of how such an iconic bridge came to be. It’s about women’s rights, it’s about relationships, it’s about war.

The book starts during the Civil War and concludes with the completion of the bridge. That really isn’t giving too much away.

In the middle of the book it seemed to drag on a bit, but I’m glad I pushed through. Most of the time I was eager for more to see how the story would develop. In the end, though, I was left with mixed feelings about the book. My mom, on the other hand, recommends it—which mostly has to do with her fondness for the Brooklyn Bridge and having been an engineer’s wife.